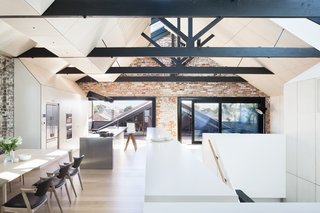 A family of three—and their six vintage American cars—all find their home within this historic 4,500-square-foot building.

Principal architect Andrew Simpson and his namesake firm were tasked with preserving the architectural past of a Melbourne neighborhood while making space for a family's modern home. His clients, a couple who owns a stainless steel fabrication business, decided to relocate to the North Fitzroy suburb of Melbourne, Australia, for the city’s vibrant culture. Like many older parents, they also brought along their grown-up daughter in the process. Simpson understood that more and more adults were living with their parents, and he wanted to create an inclusive property that provided enough autonomy to each member of this redefining clan. He found that opportunity in a gargantuan space that had never, in fact, been a home.

A 19th-century warehouse within a residential neighborhood had previously held a jam factory, an engineering consultancy, an advertising agency, and an aerated water factory, but it had never been a place where a family gathered for dinner or awoke from their beds. “The project was designed to take advantage of the existing building’s fabric as much as possible,” Simpson says. “Minimal interventions were made into the existing floors, walls, and roof structure, thereby allowing for a very efficient use of materials.” The family can be alone together in a house that has a long history of flexibility.

Kelly Dawson uploaded Water Factory through Add A Home.
Add your own project for the chance to be featured in Editor’s Picks.

“The building is listed as a building of individual heritage significance,” architect Andrew Simpson says of this two-story structure in Melbourne. “There was very little scope to alter the exterior.”

“To draw light and ventilation into what was a poorly oriented and deep footprint, an extensive number of operable skylights were introduced on the north- and south-facing roof pitches, and a large void connecting the floors was strategically positioned to also take advantage of this amenity,” Simpson says. American oak floorboards and Dulux paint were used throughout the property for continuity.

Minimal interventions by architect Andrew Simpson allowed this former jam warehouse outside of Melbourne, Australia, to be turned into a family residence. "To draw light and ventilation into what was a poorly oriented and deep footprint, an extensive number of operable skylights were introduced on the north- and south-facing roof pitches, and a large void connecting the floors was strategically positioned to also take advantage of this amenity," Simpson says. American oak floorboards and Dulux paint were used throughout the property for continuity.

“The fact that the external walls were built to the site’s boundary led to the solution of skylights as the one of the few means of introducing north light and good cross ventilation into the building,” Simpson continues. The hanging lights are from Artemide while the hotplates and cooktops are from Barazza.

The kitchen, which also features an oven by Miele, is separated from an outdoor deck by an A14 sliding door by Centor.

“A high-performance, heavily tinted glass was used within the skylights’ double-glazed units to reduce summer heat,” Simpson says. Autex Industries provided the insulation for the year’s cooler months, and the addition of a second, more geometric ceiling hides modern-day electrical and mechanical cords.

Although little was done to alter the building’s original form, the firm did demolish an extension that was the site of a mechanical plant. This alteration allowed for an outdoor deck covered with timber decking by Chemisys Group.

Simpson wanted the design to capitalize on the original floor plan’s abundance of space, but he also hoped to bolster intimacy by making rooms feel fluid. “The master bedroom [opens] at its corner to become a viewing balcony to the ‘central void.'”

“A critical aspect of the project was the incorporation of natural light and ventilation within a broad footprint,” Simpson says. Conventionally private areas, like bedrooms and bathrooms, are therefore reinterpreted with more openness in mind. For instance, this bathroom’s skylights mirror those found throughout the rest of the property. The bathtub, basins, and showerhead were all purchased at the Australian retailer Reece.

The owners are car collectors, especially of “vintage American Mustangs,” Simpson says, so a nearly 23-foot-wide garage door opening was created at the rear of the building to access a space made for six prized rides.