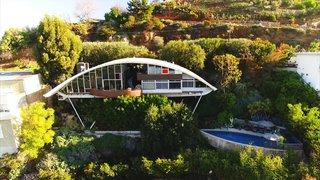 The Garcia house, designed by John Lautner, is also known as the "Rainbow House" because of the colorful stained glass windows. In 1962, Lautner designed this home in the Hollywood Hills for Russell Garcia, a composer, arranger, and conductor who had written a number of well-known film scores. Over the course of two years, he built an arched two-part structure that would allow Garcia to do his music work on one side of the house without disturbing anyone on the other side of the house.

In 2002 new owners John Mcllwee and Bill Damaschke teamed up with architecture firm Marmol Radziner and began a journey to bring the masterpiece back to life.

Mcllwee showed us some archive photographs of the house, including this original Julius Shulman gem that shows what the interior looked like in the 1970s.

Looking into the living space, you can see the colored stained-glass window panels and the arch of the roof. When Marmol Radziner began the renovation, they updated the cabinetry with stained walnut and replaced the existing formica countertops with honed, black granite that actually looks like the original formica.

Villain Arjen Rudd’s modern, canyon-top lair was an integral part of the Lethal Weapon 2 screenplay from the very beginning. Its role only grew larger as the more downbeat first draft of Shane Black’s script (Gibson’s Riggs was originally fated to die at the end) was revised by Black’s successor, Jeffrey Boam. The challenge was finding an existing Los Angeles–area structure that matched the one imagined on the page.

John Lautner, the American mid-century modern master who apprenticed under Frank Lloyd Wright in the 1930s, designed Garcia House in 1962 for jazz arranger Russell Garcia. It still sits high atop the Hollywood Hills at 7436 Mulholland Drive. With its unique almond eye shape topped by a curved, parabolic roof and supported by steel stilts sixty feet above the canyon below, the house is also known as the Rainbow House, after the colorful stained-glass panels that dot its facade.

One of the most iconic elements of the home is the lava rock that was brought over from Hawaii. It still stands as one of the main structural elements.

Shown here is the master bedroom, which is nestled at the edge of the arched ceiling and is lit up by a red stained-glass window panel.

Lautner designed a house that could only exist in a climate like Southern California. He played with the notion of going indoors and outdoors consistently throughout daily life. Mcllwee points out, “Almost every property Lautner designed has common elements of this indoor/outdoor feel.” This seating area in the middle of the “rainbow” arch looks out to astounding views of the canyon.

“The house should be seen as a piece of art,” says Mcllwee. For iconic houses like this, every little detail represents not only the era it came from, but also the life that it’s experienced throughout its existence.

The materials throughout the house are durable and are meant to make people feel genuinely relaxed. Mcllwee explains, “It’s not a tremendously big house, but it’s mesmerizing.”