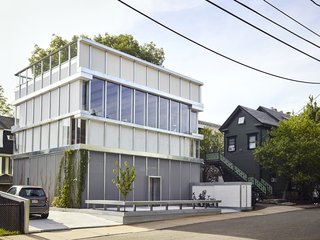 With a novel use for an ultra-lightweight material, two academics build their ideal home—then ship it overseas for assembly.

On a quiet, tree-lined street in Brookline, Massachusetts, a rectangular pale gray structure sits amid a row of wood-frame houses, many of them dating to the late 19th century. The boxy two-story dwelling is set back from the suburban block, its facade almost entirely opaque, save for a 40-foot-long expanse of glass that faces the street. Despite its stark modernity, the structure does not shock; its scale and colors are subdued. But the journey of the home’s conception and design—prefabricated in Madrid, Spain, sent overseas via shipping containers, and assembled on-site in just nine days—is wholly radical.

Opting for a lightweight, super stable design that eschews traditional weighty materials, the architects created steel-reinforced panels of expanded polystyrene foam (EPS)to form each of the addition’s seven modular parts. They now top a preexisting concrete garage that the architects had previously converted into a three-bedroom home.

A three-level bunk bed with an additional trundle furnishes the children’s room on the first floor; the cabinetry and drawers are from IKEA.

A hatch door leads to the roof deck, which is lined with artificial turf.