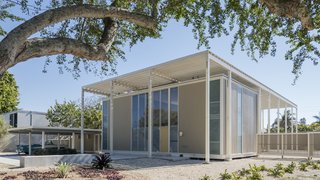 Architectural Digest described the Umbrella House as “One of the five most remarkable houses of the mid-twentieth century”. In 1953, developer Philip Hiss hired renowned architect Paul Rudolph to create one of the 20th century's most iconic houses. The dominant feature of the house, the aptly named "umbrella," was originally built of wood and used to shade the house from the intense Florida sun was lost in a storm in the 1960's. The full umbrella over the pool was restored in 2015, receiving the 2016 Florida Trust for Historic Preservation Outstanding Achievement Award, 2016 Florida AIA Honor Award of Excellence for Historic Preservation/Restoration and the 2016 Florida Gulf Coast Chapter AIA Honor Award for Historic Preservation and Rehabilitation.

TOURS: The Sarasota Architectural Foundation (SAF) conducts once-a-month public tours of the Umbrella House but due to the COVID-19 pandemic the tours are on hold for the time being. Information: www.SarasotaArchitecturalFoundation.org

uploaded Umbrella House through Add A Home.
Add your own project for the chance to be featured in Editor’s Picks.

Front exterior on Westway Drive in the Lido Shores neighborhood.

The original wood "umbrella" shading Paul Rudolph's Sarasota Umbrella House, completed in 1953, was lost in a storm seven years later. In 2015 it was restored to completely cover the pool area.