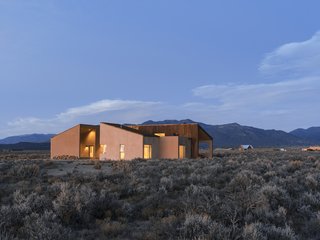 When Taos contractor Ed Bell called his daughter Molly in the fall of 2014, he had a simple enough request: "I’ve got a potential client for you. Why don’t you send her your portfolio?" Molly, who was working in Los Angeles after earning her master’s in architecture, laughs at the memory. "I didn’t actually have a portfolio from grad school, but I said, ‘Sure.’"

She pulled together some images and sent them off to Lois Rodin, who had moved to New Mexico in 1984 and finally had the means to build a place of her own. The septuagenarian knew exactly what she wanted: a loftlike space with shed roofs, white walls, wood floors, big windows, and a silk screen studio. She’d met Ed while she was working for the artist Larry Bell—no relation—and showed him an undeveloped five-acre lot on the windswept outskirts of Taos.

"I said, ‘Can you build on this? Yes? Great,’" she recalls. And despite Molly’s lack of experience, Lois saw something in the aspiring architect’s work. "I was looking at the design relationships," she says. "Was she sensitive to how things relate to each other? I could see it immediately."

Born and raised in Taos, Molly had left the area to spread her wings, studying at the University of San Francisco before getting her B.A. in architecture from the University of New Mexico and then returning to California to attend USC’s School of Architecture.

After some back and forth—"I sent Lois three drawings and she didn’t like any of them, but she continued to work with me," Molly marvels—the design was complete. Topped by three shed and two flat roofs, the 2,500-square-foot structure—whose main block opens east across miles of sagebrush to the magnificent panorama of the Sangre de Cristo Mountains—reads like a cluster of individual elements, just as Lois had visualized: a long space for the living/dining room and kitchen, a wing for the guest bedroom, laundry, and master bedroom, and another wing for the studio. Since Lois wanted this to be her "forever" home, Molly incorporated elements like lever handles, a curbless shower, and easy access from the carport to the studio.

When the project began, Molly intended to remain in Los Angeles while her father and his team of subcontractors and craftspeople built the house. But after the well was drilled and a transformer that would provide electricity was installed, Ed made another call to his daughter. "Why don’t you just come out?" he suggested.

Already pondering moving on from her job in L.A., Molly returned to New Mexico and got to work. Soon she was pushing wheelbarrows, helping to dig trenches, trying her hand at laying concrete blocks, and absorbing the building process from the ground up. Though the precision of her detailing earned her the moniker "Zero-Tolerance Molly," she embraced the learning curve that came with the job. "It was an atypical experience for an architect, but I now know this house backwards and forwards," she says.

Ed saw it as an invaluable rite of passage. "I had Molly here every day to learn how to build a house," he says. "I’m pretty hands-on as a builder. Pushing a broom is the smartest thing a contractor can do, because every day you see everything."

Along with the difficulty of getting materials to a place that’s relatively remote, designing in a different vocabulary challenged everyone involved. "I came with ideas like the rusted metal siding and the corner windows—not knowing how difficult they would be," says Molly. "It was totally an architecture school thing."

But her father welcomed the chance to do something different. "Before I moved to New Mexico in 1980, I read that I should leave my level behind. And here’s Molly, for whom sharp edges and shadow lines are everything," he recalls. "I thought, ‘This is really hard.’ But as the project progressed, I saw how incredibly beautiful it was."

Lois agrees. "When Molly said she wanted to put rusted metal on the sides of the house, I said something stupid like, ‘It’s roofing, it belongs on the roof.’ It took me three days to come around."

Molly stayed in New Mexico for the eight months it took to build the house, which was enough time for Taos to work its magic. "I went back to Los Angeles and realized I wanted to live here," she says.

As Molly completes her architect’s license, she and her father are already plotting their next house. In the meantime, Lois revels in her high-desert dwelling, making prints in her studio and taking in the ever-changing light. "I’ve lived out in the middle of nowhere," she says, "and I’m always trying to get back to that."

On a five-acre property outside Taos, New Mexico, designer Molly Bell worked closely with her father, builder Ed Bell, to create a new residence for owner Lois Rodin. “Lois requested that it appear as a grouping of individual masses, so that it read more like a cluster than a solitary shape,” Molly says. “I hope it shows that it’s OK to do something modern in such a traditional environment, and not to be afraid of it.”
-
Taos, New Mexico
Dwell Magazine : July / August 2017

Rusted metal, used on three of the home’s five roofs, extends to the entrance facade, which, in a nod to northern New Mexico’s haciendas, opens to a courtyard. Rather than buy pre-rusted siding, Molly and her father oxidized the steel themselves.
-
Taos, New Mexico
Dwell Magazine : July / August 2017

A gravel perimeter keeps mud from splashing on the walls when it rains. Adds Molly, “You can get away with minimal landscaping because there’s so much natural vegetation here.”
-
Taos, New Mexico
Dwell Magazine : July / August 2017

“It was important to Lois that the outside come inside,” says Molly, who designed the master bedroom to maximize the views. “The windows make you feel like you’re in a sea of sagebrush.” The Equo Gen 3 LED floor lamp is from YLighting.
-
Taos, New Mexico
Dwell Magazine : July / August 2017

The master bathroom features one of two corner windows in the house. “At night, when I take a bath, I can see the moon and the stars,” says Lois.
-
Taos, New Mexico
Dwell Magazine : July / August 2017