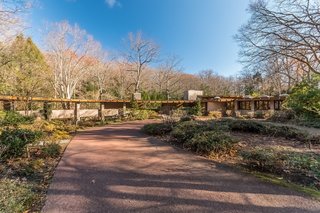 For the price of $8 million, Frank Lloyd Wright’s last extensive residential commission is on the market after being thoroughly maintained and treasured since its genesis in 1955.

Located in New Canaan, Connecticut on a 15-acre piece of wooded land that looks over the Noroton River, 432 Frogtown Road was first built for Joyce and John Rayward and has only been in the hands of two other owners. Most recently, businessman and philanthropist Ted Stanley lived in the home with his wife Veda for more than 20 years until he passed away in January of last year. Also known as the "Rayward-Shepherd House" or "Tirranna," Wright designed this spectacular home during the last years of his life while he was completing the Guggenheim Museum in New York City.

Only four years after the house had been built, the Raywards commissioned Wright’s firm to return and complete a massive extension that would be based on his original designs. So, William Wesley Peters and Taliesin Associated Architects ended up expanding the house after Wright’s death in 1959, which included a new bedroom wing, greenhouse, central garden, covered walkway, and a caretaker’s quarters. Jim Gricar of Houlihan Lawrence explains that even though these additions expanded the residence enormously—making it a seven-bedroom, eight-bathroom home—all of the same materials and finishes were maintained from the first round, making it a seamless update. "Because of this, the house as a whole has aged and patinaed in the same way over the years," he points out.

As you explore the extensive residence below, make sure to take note of the incredible detail that Wright employed, as well as the strong connection he created to the outdoors—which is something he was a master of. You’ll find the listing here through Houlihan Lawrence.

The greenhouse features windows that are finished with a scalloped metal treatment. Gricar points out that the metal scalloping can also be found on the Guggenheim—solidifying a connection to the other project that was on Wright's mind at the time.

Since Wright was consistently focused on nature, he built an internal courtyard that creates a peaceful retreat in the middle of the structure.

Shown here is one of the double master bathrooms, which holds a new tub that sits in front of a painted plaster wall. The layout and mahogany panels have remained original.

Similar to his Fallingwater masterpiece, Tirranna was built near a body of water and a waterfall. In fact, the word itself comes from an Aboriginal term meaning, "running waters."

The original living room holds a number of furniture pieces that Wright designed. Since he enjoyed interweaving textures and materials, he created a fireplace that’s made of concrete block—but painted with gold leaf. Gricar explains, "He loved the material play between fancy and utilitarian."

The red flooring that runs throughout the interior is Colorundum in Cherokee red, a color Wright loved to use in his projects. Jim Gricar of Houlihan Lawrence explains that the flooring is made up of a series of minerals that have a low freezing point, which makes it difficult to crack.

In the family room—which also holds a gold leaf-covered concrete fireplace—large skylights run the width of the space.

From the front of the house, you can see that Tirranna was designed in a hemicycle shape, which Frank Lloyd Wright was known for. The main entrance to the house sits under the chimney stack near the center, while the covered breezeway on the left leads to a four-car parking structure, the greenhouse, and the caretaker’s quarters.

Though the appliances have been updated, the rest of the kitchen is original, including the cabinets, piano hinges, and the painted glass windows on the ceiling.

The interior of the home is almost completely lined with mahogany, along with sections of concrete blocks. Wright’s design called for different cuts of wood to be placed together, which creates a rich layered effect.