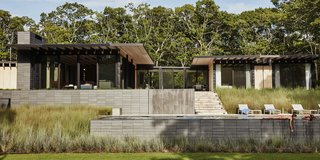 An East Hampton residence by Bates Masi is situated to harness the elements.

Not everyone goes to the Hamptons for the social scene. Some people still head to the East End of Long Island to engage with the natural environment, a seascape where the Atlantic Ocean meets expanses of pristine beach studded with tall grasses, rustic picket fences, and shingle-clad homes. George and Catherine, Manhattanites with a family that loves water sports, are some of those people. So when they decided to build the escape they had always imagined near one of the best spots for wind sports in the area, they called Paul Masi, of East Hampton-based Bates Masi + Architects.

“I’m a surfer,” Masi says. “I understand that for these clients, being in the Hamptons is not about networking. They get up early and they’re on a board. The wind is an important factor in their lives and that plays into the architecture.” In fact, the low glass structure that he created enables the family—George, Catherine, and their son and daughter—to sense when swells are coming. “I designed the house as a barometer for the wind,” Masi says.

The couple first met Masi when they unexpectedly found themselves standing at the threshold of his Amagansett residence. “We’d been coming to the Hamptons for more than twenty years and were looking to buy a bigger home,” Catherine says. “We drove by a modern house that was just being completed. We liked it so much we knocked on the door. Paul answered and told us it was his house—and he was the architect. We knew then that he was the right person to design our home.”

“I designed the house as a barometer for the wind.” Paul Masi, architect

Masi, who earned his master’s of architecture degree from the Graduate School of Design at Harvard and worked at Richard Meier & Partners before starting his own firm, devised for them a 3,200-square-foot piece of dynamic architecture that goes beyond referencing its surroundings and actually works in tandem with the wind, water, and sunlight, so their effects become greater in and around the house.

The home is sited on a rectangular lot that runs west to east, the direction of the prevailing wind. The architect carved out a narrow swath of the wooded site and oriented the H-shaped house along the same west-east axis. “The idea was to create this tunnel where the wind would come down through the clearing, over the swimming pool and into both wings of the house from the west,” says Masi, who employed glass walls that slide open to admit the breeze. “When the wind really starts to get up, they feel it and know it’s time to get out on the water.” The building’s form, with rough-sawn plywood and slate shingle exterior siding to offset the expanses of glass, harnesses the wind, while the structural elements direct it through the rooms.

“It’s an H-plan. The U-shaped parts of the H on the top and the bottom grab the breeze,” Masi explains. Exposed glue-laminated timber beams also run west to east along the white-oak ceiling and function as ventilation pathways. To employ beams with dramatic length, Masi broke each of them toward their center and attached thin metal splice plates at the break, where light fixtures are now. “The beams hold up the roof but they also help circulate wind that’s captured by the house’s deep overhangs,” he says.

“When the wind really starts up, they can feel it and they know it’s time to get out on the water.” Paul Masi

The residence’s two-part layout separates public from private spaces: The kitchen, dining, and living areas are located in the northern wing, and the family’s bedrooms and bathrooms are in the southern. A glass-enclosed walkway bridges the two sections and offers access to an exterior reflecting pool that’s tucked into an alcove. “As the sun rotates around the house, it bounces off the rippled surface of the water and projects the character of the wind onto the ceilings of adjacent spaces,” Masi says. The architect also planted native grasses, lavender, and mint on the windward side of the structure so the breeze picks up their scents and carries them through the house.

To pay tribute to the traditional architectural vocabulary of the Hamptons while staying true to the home’s modern sensibility, Masi employed gray slate shingle cladding in a horizontal format. The sleek and textured pattern of rectangles covers the base of the western wing, the front facade’s substantial chimney volume, and the low walls that retain the reflecting and swimming pools. The architect used slate shingles on the interior, too, affixing them to the living room fire surround. He also continued the materiality of the white oak on the inside, using it for the floors, the kitchen cabinetry, and the built-in dressers and desks in the bedrooms. Catherine, with the help of interior designer Elizabeth Bolognino, brought in additional modern furniture pieces with simple silhouettes that don’t compete with the wooded landscape.

“Like a sail or a kite, the house is something light and delicate on the surface of the land,” Masi says. “It’s a reflection of what this family loves to do and why they come here.”