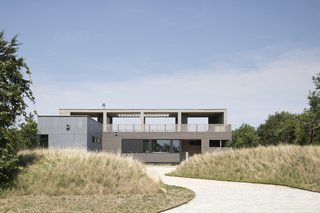 Located in Mattituck on the North Fork in Long Island, this modular, prefab home is designed as a multi-generational retreat for three siblings, their families, and their parents. The home is composed of four modular units that were fabricated in Scranton, Pennsylvania then shipped and set in place at the home’s site that looks out over a bluff to the Long Island Sound.

Two of the modules contain four equitably sized bedrooms, each with their own bathroom, for the respective families. The other two modules are combined together to form the home’s entry and an open kitchen, dining, and living space with a media room at one end and a music room to the opposite side. The modules are built above a basement that houses a playroom and two bunkrooms for the kids. The living space opens up to a rear pool deck, featuring a barbeque zone and long, built-in benches for lounging, providing multiple zones for all of the family members to congregate.

A large overhead canopy shades the roof deck, featuring a wood-burning fireplace and additional outdoor lounging space. On one side of the roof is a putting green for the grandfather and on the opposite side is a bocce court. In total, the house contains 5,100 square feet of living space on three levels with six bedrooms and five bathrooms. It was completed in 2017.

Resolution: 4 Architecture uploaded North Fork Bluff House through Add A Home.
Add your own project for the chance to be featured in Editor’s Picks.

Entry to home via bridge

Landscaping slopes toward the home, allowing for light to enter the basement / playroom

Outdoor dining area (L); Lounge area at pool leading to a stair to the roof deck beyond (R)

Putting green on the roof deck

Roof deck with trellis above and outdoor fireplace beyond

An ipe bridge provides entry to the home

Front of the home at dusk

Entry vestibule with stair to roof on the left

Basement / playroom with bridge to home beyond

Bedroom at front of home

Bedroom at rear of home with view to Long Island Sound