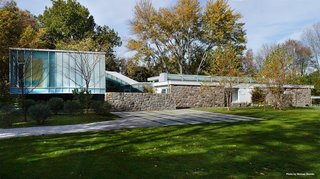 It’s a rare occasion that an iconic home is put on the market—let alone one that the architect actually lived in. So is the case with this Marcel Breuer-designed residence in New Canaan, CT that’s listed with Houlihan Lawrence for $4,850,000.

What makes this home so special is the fact that Breuer himself lived in it with his family for more than 20 years after he built it in 1951. Additionally, the way it stands today is largely in-line with the way he originally intended it to be—thanks to a pair of dedicated homeowners and an architect who understood that they had a treasure in their hands.

As a couple who’s passionate about midcentury modern design, the most recent owners refused to let the house be demolished by a builder who wanted to build a colonial in its place. So, they purchased the property for $2,600,000, with plans to bring it back to life. They brought architect Toshiko Mori into the picture, which began a three-year project to bring Breuer’s vision to the 21st century.

Mori’s addition is constructed of steel, concrete, glass, and bluestone veneer. She decided to preserve the ceiling height of the main house (11’6”) and lined the roof with Voltaic solar panels.

Looking towards the residence, you’ll see the original main house to the right, and the steel and glass addition to the left—which are connected by stairways that lead up on one direction, and down on the other. The main house contains the communal living spaces while the addition holds the bedrooms.

The Breuer property sits on three acres and includes a heated pool, pool house that was originally designed in 1981, sunning deck, and a Mori-designed wine cellar. The terrace features a waterfall and fern garden.

The ceiling heights were preserved throughout much of the house while skylights were placed all around the perimeter of the main structure. The living room holds an original fireplace (shown here).

In the master bedroom, Mori custom built a bed with side drawers and lined the space with windows that are outfitted with automatic curtains—both blackout and sheer.

Listing agent Sherri Kielland explains that in order to preserve the radiant heated floor, she chiseled the original floor off while cataloging all the stones. After laying down the new radiant heated bluestone floors, she pieced it back together like a puzzle. She also dug a well under the kitchen area to house the mechanicals of the house.

The original Breuer structure is connected to Mori’s addition by a triangulated glass corridor that includes a graduated staircase.