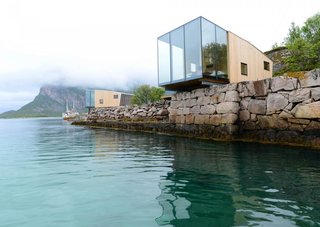 Consisting of 55 acres in the middle of the Grøtøya strait, Manshausen Island was originally established in 1698 and became an important area for the old trading post of Grøtøya. The stone quays that exist on the resort's property originally housed one of Northern Norway's largest wooden buildings that was used as storage during the fishing season.

Since then, it’s become a destination for adventure seekers and lovers of the outdoors. Along with becoming a go-to locale for fishing, diving, cycling, climbing, kayaking, and hiking, it holds a boutique island resort that puts you right in the middle of it all. The four sea cabins that were designed and built by architect Snorre Stinessen over the course of five years, are all for rent and promise an unparalleled, immersive experience.

This boutique hotel on Norway's Manshausen Island is made up of four sea cabins—one of which juts out from a natural ledge. Each of them fit two to four travelers or a family of five.

Stinessen placed each cabin carefully in order to ensure the best possible views and the right amount of privacy.

The cabins are made up of two layers of wood construction. The exterior layer is made of Larch wood with a custom glazing.

The large expanses of glass frame views that were perfectly planned. The seating areas are furnished with Scandia lounge chairs that were designed by Hans Brattrud in the 1950s and are now being produced by Fjordfiesta.

Each hut consists of two bedrooms with double beds, a small alcove, bathroom, shower, and small kitchen. Stinessen made sure to provide enough built-in storage for visitors, while also keeping the surfaces natural and raw.

When you stay in Manshausen, you’ll be suprised to find a hot tub and dam that you can enjoy at your leisure. It holds up to 14 people and leads down to a dam that holds salt water that’s pumped into the contained area to keep it fresh.

Also on the property is a main house that was built in the 1800s. After thoroughly renovating the structure, it now consists of a dining area and large open kitchen on the main floor, and a library with a seating area on the second floor. Breakfast is included in your stay and is served here throughout the year. From April to November, lunch and dinner will also be served.

While you’re there, make sure to try out activities or sports that take advantage of the incredible natural surroundings. You’ll be able to rent a boat, kayak, snow shoes, a bicycle, or fishing and diving equipment. You can even sign up for a group fishing trip or have a chance to see the winter lights.