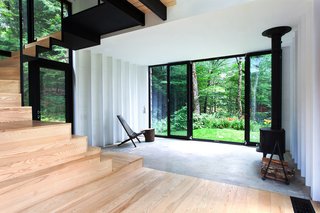 Landscape architect Suzanne Rochon spent more than two years searching for an isolated weekend getaway close to her home in Montreal. Upon discovering five densely wooded acres with an old lumberjack’s shed in the Eastern Townships region in 2002, Suzanne says she "fell in love with the land and nearly forgot to visit the shack." No wonder. The rough-sided structure had just one window and a Dutch-style barn door for light. It had electricity, but no running water. It was also strewn with items discarded by the hunters who occasionally used it. It was, in a word, "disgusting," as she remembers.

Suzanne spent the next 10 years working on the building, which was constructed on a concrete slab measuring 400 square feet. She added windows, a rain barrel, and a composting toilet and began removing dead trees to clear out a view of the nearby mountain, doing nearly all of the work herself.

While Suzanne treasured the tiny haven, it didn’t offer much in the way of modern conveniences for visiting friends. Yet she didn’t want to expand beyond the home’s original perimeter for fear of compromising the mix of spruce, hemlock, maple, birch, larch, and beech trees harboring it. So when she approached Loukas Yiacouvakis and Marie-Claude Hamelin, partners at YH2 Architecture, in 2012, she was unyielding on just one point: The renovation must not exceed the existing footprint. Clearly, the only way forward was upward. For Hamelin, that meant looking to the surrounding forest for ideas.

"A tree begins as a narrow trunk, and then branches out into a wider canopy—we simply applied the same principle," says Hamelin, the lead architect. "The idea was to mirror the forest in our design without disturbing it in our execution."

Clad in dark cedar, the home now stands three stories tall, with upper floors that project outward to create a pen‑tagonal volume. The cozy nest resembles nothing so much as a birdhouse, or dovecote. Which is why Suzanne named it La Colombière, meaning The Dovecote in her native French.

Two large doors bridge the gap between the surrounding landscape and the concrete that still makes up the living room floor. Rustic furnishings and exposed white-painted studs appear throughout the dwelling, which is heated by a woodstove fueled by firewood Suzanne cuts and splits. A sculptural staircase made of ash wood and supported by a black-painted steel structure wends upward past Suzanne’s second-story bedroom and bath—now with running water—to a third-floor roost that’s bookended by a large window to the east and a balcony to the west. Here, guests can sleep, read, or catnap in the sunbeams that stream through the oversized windows, or simply perch on the covered deck, at home with the birds in La Colombière’s tiny aerie.

After: A peek inside the beautifully restored, modernized abode.

By building upward and outward, YH2 Architecture added to a former lumberman’s shed without harming the nearby trees.

By building upward and outward, YH2 Architecture added to a former lumberman’s shed without harming the nearby trees. The new 1,300-square-foot home is tucked away in southeastern Quebec.

The pentagonal geometry of the third story is echoed by an Alumilex window.

The addition rises above the original shack’s 400- square-foot concrete foundation, which is partially visible in the living room. A Cricket patio chair by Hershy Way is used for indoor seating opposite a Morsø wood-burning stove.

Architects Marie-Claude Hamelin and Loukas Yiacouvakis connected the home’s three levels in dramatic fashion. Ash treads float on a steel stringer from the ground floor to the mezzanine.

The second floor is a master bedroom, bathroom, and mechanical room, along with an open volume that fills the house with light from the Alumilex doors and windows. The paint is Distant Gray by Benjamin Moore.

The interior is spare and modern. The cabinets and chairs are from IKEA. So is the table, which has a DIY laminated-ash top. Suzanne Rochon bought the cabin in 2002 and spent a decade fixing it up before calling on YH2 Architecture. In 2005, she added five acres, doubling the property.

Suzanne Rochon bought the cabin in 2002 and spent a decade fixing it up before calling on YH2 Architecture. In 2005, she added five acres, doubling the property.