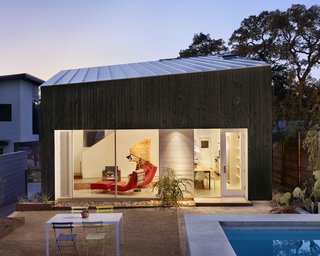 The Hillside Residence is a substantial renovation and expansion of a 1927 bungalow in the Travis Heights neighborhood of Austin, Texas. The existing, 1,000-square foot building was rescued from dilapidation; it was delineated abstractly in stark white and paired with a new, 1,100-square foot sculptural volume clad in black-stained cypress and connected via a glass entry bridge. Akin to Marcel Breuer’s 1943 proposition for a Bi-Nuclear House, the home is split into two zones—one for living and socializing, and the other for concentration, work and sleeping. By virtue of entering in the middle, both sides appear to be in dialogue with each other. Inside, the two zones are defined in distinctly different material and spatial characters; the combination is both gracious and provocative.

The renovation respects the existing building's disposition and maintains its collection of discrete rooms; at the same time, the renovation radically alters the rooms' character through an adjustment in organization. That is, a series of private rooms now take the place of what was public, and the front porch is removed, leaving the existing bungalow’s massing intact but intriguingly unfamiliar as it appears without any obvious way to enter from the street. This private nucleus is accessed through a new corridor that leads to an unexpectedly tall central space, off of which are arrayed the private rooms of the house. Unlike the traditional organization of the home, the expansion opens the public spaces to the backyard and, by contrast, is characterized by openness, dynamic spatial continuity, and abstraction.

alterstudio architecture uploaded Hillside Residence through Add A Home.
Add your own project for the chance to be featured in Editor’s Picks.