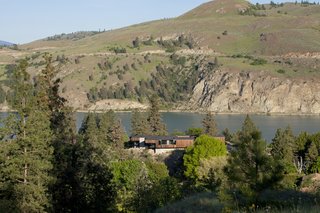 Positioned on a rocky outcropping in Coldstream, British Columbia, Jon Friesen and Silping Wong’s home presents a paradox: The glassy box, cantilevered into space, suggests lightness and pure form, while the cladding of burned Douglas fir and raw steel gives the impression of solidness, utility. The house, designed by D’Arcy Jones, has an air of being at once rugged, broken-in, and effortless. “It was built to be very tough, like a farmer’s post,” Jones says, “but also delicate relative to the site.”

The house overlooks Kalamalka Lake Provincial Park, located roughly halfway between Calgary and Vancouver. When Jon and Silping, both medical professionals, embarked on the project, they had in mind a dwelling that complemented their lifestyle, which is oriented around outdoor activities. “We knew that we wanted the house to be an extension of the park, to feel like it had organically grown out of the park, rather than like it was imposed upon it,” Jon says. “We wanted to feel, no matter where we were in the house at any given time of day, that we were walking around in the park.”

The climate in the area ranges from freezing winters to summers that can top 100 degrees. The project’s original precept—to keep the house open to that environment yet comfortable year-round—led to structural innovations that became sources of inspiration. The need for heat retention led to the early decision to tightly enclose the interior in an exacting arrangement of rigid insulation, using small steel pins as floor slab supports at cantilevered spaces to keep the cold from entering; in engineering this solution the insulation became the structural support. This dual role became the starting point for an approach that emphasized efficiency that in turn fed creative touches: A standard concrete Sonotube used as a support column was hollowed out on one end and became a patio fireplace. “Saddlebag” units under the overhangs increased storage and temperature control while reducing the glass budget. The project became centered on simplicity and economy. As Jones puts it, “You take out all the fat and say, ‘Okay, what we have left are the things that matter most.’”

Jon agrees: “The approach evolved between the two of us during the design process—for example, choosing materials that require very little to no upkeep, with the idea that the patina of these materials will weather over time, and that that’s okay.” Jones had decided to clad the house in Douglas fir, a relatively inexpensive, thick and corky soft wood that is native to the region. He was considering various treatments when Jon stumbled upon shou sugi ban, the traditional Japanese method of charring cedar to cure it against weather and infestation. “I got in and did it myself,” Jon says. “My dad helped me out—we rented a couple of Tiger torches and actually did all of the burning over a month and a half.”

Entering the house from the carport, one climbs a flight of stairs onto a long covered path that borders an inner garden of native plants. The passage from the street to the house becomes a sort of peaceful interlude in the experience of the space—a sonic and textural dimension suggesting a kind of portal. “In a rural setting, that would be the gravel under your tires,” says Jones. “It makes you feel like you’re on your own chunk of land.”

The charred-wood facade on Silping Wong and Jon Friesen’s house in western Canada was hand-done by Jon and his father. They used Douglas fir, a thick, corky wood that is local to the region.

The 1,900-square-foot home, designed by architect D’Arcy Jones, is made of cement, raw steel, and charred wood, materials that were chosen for their low maintenance.

“We didn’t treat the steel,” explains Jon. “We said, you know what, we’re going to let it rust. And the concrete block wall—you just sort of leave it and let it age.”

All of the plants are native to the area. “I was trying to re-create what I have out my front door, where the park starts,” says Jon, who worked on the landscaping with Jones. “The garden is also super low-impact. I don’t water it at all, and my kill rate is less than five percent.”

A custom table designed by Jones features a pull-out bench on one side and 1C dining chairs by Room B on the other; the Globo pendant is by Viso.

The living area includes a red Canyon sectional by Bensen and a Pensi ceiling fan by Modern Fan Company.

In the kitchen, the cabinetry is by High Country Cabinets and the countertop is Caesarstone.

The bathtub is Aquabagno by Aquabrass.