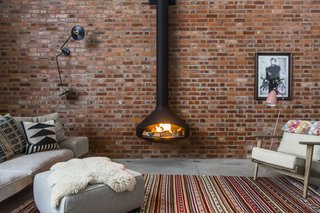 Built in the late 19th century, a former cooperage where barrels were manufactured for a local brewery now holds a bright, contemporary home that is available to rent.

Nestled in central London’s Clerkenwell neighborhood—a former industrial district with a burgeoning food and design scene—the four-bedroom, three-bath residence is perfect for traveling families. The building was used by a French polishing company in the 20th century before being converted for residential use in the 1980s. In 2015, the homeowners approached Chris Dyson Architects to renovate and extend the home. They expanded the basement and removed a mezzanine floor to create a triple-height living space that allows a dramatic feature staircase to take center stage. A living wall designed by Scotscape gives the dining room a lush, conservatory feel, while a roof terrace and outdoor shower further connect visitors with the outdoors. Tucked back from the street, the loft provides its guest with sense of seclusion and calm.

Formerly the site of a French polishing company in the 20th century, this building in Clerkenwell, London, was converted by Chris Dyson Architects in 2015 into a residence with an expanded basement and triple-height living space that allows a dramatic feature staircase to take center stage.

Entering the apartment from the street level, guests meet a dramatic, three-story atrium and a feature staircase. A glass balustrade heightens the effect.

Once barrels were manufactured here for a London brewery. Now a bright, modern home exists, transformed by Chris Dyson Architects. The basement was expanded, and the mezzanine floor removed to create a triple-height living space. A living wall designed by Scotscape in the dining area, roof terrace, and outdoor shower connect tenants to the outdoors.

The living room, kitchen, and dining room sit below street level in an open, communal area. A large, operable skylight measuring six by three meters allows light to stream over the dining table—the four glass panes had to be craned over the neighboring buildings.

The living wall designed by Scotscape provides a refreshing backdrop to the dining area.

Four bedrooms on the upper level feature wood floors, modern art, and ceiling beams, while the master bedroom on the third floor (pictured here) enjoys an ensuite bathroom and private terrace. On the rooftop, another bronze-clad terrace supplies a barbecue and city views.