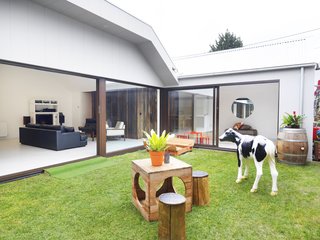 A derelict home in Melbourne received a complete overhaul by Jost Architects in five months.

In a Melbourne suburb, a rundown 1850s cottage sat vacant on the market without buyer interest. Its worn and weathered appearance didn’t deter the property’s eventual owners, Agata and Chris Millington, from seeing the potential behind the dilapidated facade, though. The home, a prefab manufactured in Boston, was originally shipped from the United States to Australia in the 1850s and assembled on site. This historical context meant that the original structure could not be torn down, but instead had to be preserved in compliance with local Heritage Council restrictions. Unphased, the owners embraced the original structure, and set out to create their dream home. Together with Melbourne-based Jost Architects, the couple dramatically transformed the derelict cottage into a lively and vibrant home for themselves and their young son, all in just five months.

Sarah Akkoush uploaded 1850s Prefab Cottage from Boston Finds New Life in Australia through Add A Home.
Add your own project for the chance to be featured in Editor’s Picks.

Keeping the original home intact, the team added to the existing structure to create a U-shaped layout that surrounds an open courtyard. The deteriorating old roof was replaced with a custom galvanized steel Orb roof by Lysaght, and the entire rear façade was wrapped with clean white BGC Durascape cement sheeting. A life-size plastic cow, found at the home when the couple bought it, became a permanent fixture in the yard.

The original rear façade can be seen, in stark contrast to the modern update. Agata and Chris Millington, an internal space planner and builder/developer, were eager to put their creative stamp on the home. Chris acted as project manager for the renovation, and the couple worked diligently with the architects to ensure the project was completed on time and under budget.

The cozy “rumpus room,” a kids playroom that functions as a second living room, looks out onto the courtyard. The space was designed to encourage kids’ creativity, while complementing adult tastes. With the addition of a movable wall, the space can be sectioned off so children can be seen but not heard. Functional and durable white cork flooring completes the child-friendly space.

Central to the design of the home from day one was the “Dunny Block”, an Australian toilet historically found outside the home. The Dunny Block from the yard of the original home was incorporated into the interior program of the new home, now housing the new main floor bathroom. The block is clad in recycled messmate timber, and is a bold focal point of the living space.

The master bedroom is seen during partial demolition. As part of a kit home, the original 19th-century framing was marked with Roman numerals to enable on-site assembly, and relocation/reassembly (if necessary) during shipping and construction in the 1850s.

The kitchen is positioned strategically in the middle section of the home’s U-shaped layout. Vintage Bentwood chairs of varying wood tones were chosen for the dining set. The expansive aluminum framed window openings are double glazed in bronze, an eye-catching exterior design note. Recycled messmate timber boards are again used for the kitchen wall and island cladding.

Along with the bedrooms, the home’s study features local Australian undyed wool carpets. The red cedar tabletop was repurposed from an old Queensland table that had been in Agata’s family. Brightgreen LED downlights illuminate the space. The orientation and functionality of the office is one of the couple’s favorite aspects of the home; they are able to work in a private area while keeping an eye on their son across the courtyard in the playroom.

The original home is seen before the dramatic transformation. During the demolition, roof shingles were uncovered beneath the corrugated iron sheeting. It was theorized that the home could have originally been a general store, halfway house, or possibly even a brothel.

The colorful new front façade is clad in recycled sugar pine boards salvaged from the original house. The limited lot size meant that the team had to build boundary to boundary, almost directly up to the sidewalk. Like the rest of the home, the exterior balances history and restoration, offering a “controlled contrast” of color and texture. The result is a unique family home that is both bold and whimsical in design, and sensible in function.