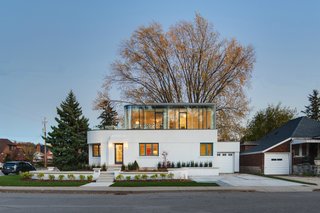 Carefully working with the community and two architecture firms, this family of three restores a historic structure and adds a glass second floor.

There are only a handful of Art Moderne examples in the predictable sprawl of Ontario's suburbs. Built in 1939, this home (named the Hambly House for its first resident) had become an iconic sight in the Westdale neighborhood of Hamilton. But by the time a couple with one child purchased it in 2013, the house wasn’t exactly an emblem of pride. It had been unoccupied for years: extensive water damage bloated its stucco walls and allowed mold to grow uninhibited. Although its original design was lauded for firmly representing the Art Moderne movement, its many dividing walls were viewed as excessive by today's residental home standards. Nevertheless, the owners wanted to preserve the property’s classic features while adding new ones that continued its history of unconventional design. It was a task that they couldn’t do alone. Alongside DPAI Architecture and Toms + McNally Design, the pair held open houses throughout the planning phase so that neighbors could have a say in the finished look. When the renovation was complete, the address became a celebrated rarity once again. Only this time, the construction of a second story—complete with a complementary curved glass wall—is poised to raise a new set of eyebrows.

Kelly Dawson uploaded Art Moderne through Add A Home.
Add your own project for the chance to be featured in Editor’s Picks.

The dramatic curving glass of the second floor addition quickly recalls the original first floor's rounded edge; streamlined curves such as these are a defining characteristic of Art Moderne architecture. PPG IdeaScapes supplied the curved glass itself.

Although the main goal for the renovation of the ground floor was to create a more open floor plan, it was equally important to preserve as many details as possible. The plasterwork on the ceiling and the marble fireplace are both original features. A Florence sofa from Van Gogh Designs stands across from a feather lounge chair by Elite Living.

A table and accompanying chairs by EQ3 sit under a Moooi light fixture in the dining room, a room that was added to the original structure. Glass doors from NanaWall allow for the patio and dining area to become one cohesive space in the warmer months.

The owners brought their Elmira Stove Works appliances, including the Model 1958/1959 refrigerator and the matching Model 1955 stove, into their new home. Custom cabinets and IKEA chairs provide an equally bright finish.

Benjamin Moore’s Cloud White paint color, which was used throughout the home, lets the African mahogany flooring stand out.

A TrueModern Luna sofa and chaise are the sole dark accents in the abundantly sunlit upstairs living room.

A bed from TrueModern’s Dane Collection sits between matching side tables by EQ3. When the sun isn’t shining, two Target lamps brighten the space.

A Rubi bathtub by Ramacieri Soligo was installed beside a shower with Aquabrass finishes. Stone Tile International supplied the Amore porcelain tiles, in graphite black, that spread across the floor.

The home's white stucco exterior is actually a thin layer of stucco spread over a modern EIFS (Exterior Insulation and Finishing System) from Dryvit.