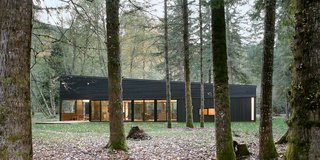 After years of visiting the area as vacationers, one couple builds this striking home for their retirement outside Greenwater, Washington.

Over the course of many years, a couple in their late 50s perfected a cherished routine. At the end of every workweek, the pair would leave their property in Gig Harbor, Washington, and drive 90 minutes east to the banks of the White River. A small cabin near Greenwater would be waiting for them, but instead of spending their weekends inside, the couple sought adventures outdoors. Seasons came and went with five-day intervals—summers were devoted to mountain biking and winters were passed skiing–until one day, the couple sought a change. They didn’t want to wait for the weekends to enjoy themselves any longer, and they grew tired of road trips to a secondary home. The couple wanted to create a permanent residence in the area, a place where they could retire and still revel in the rugged surroundings. On a flat site surrounded by evergreens, principal Robert Hutchison and his namesake firm met their straightforward request with a two bedroom home clad in stained cedar. “To the east of the site is the White River,” Hutchison says. “When the windows and doors are open during the summertime, you hear the sound of the rushing river throughout the house.”

Kelly Dawson uploaded Courtyard House on a River through Add A Home.
Add your own project for the chance to be featured in Editor’s Picks.

"The cedar siding is simply stained with a black semi-transparent oil stain [from Cabot], which allows the color of the wood to still emerge through,” architect Robert Hutchison says. “We love how the black color makes the building recede into the background, and how it in turn allows the trees on the site to emerge as the highlight.”

“From the street, it appears as a rectangular building with sloping shed roofs, but this is actually an illusion,” Hutchison notes. “The floor plan is actually U-shaped, wrapping around an entry courtyard that is contained by the continuous west facade.” A standing seam metal roof by Custom Bilt Metals blends in with the cedar siding.

“When you enter the courtyard, you realize that you have left the forest and entered the house,” Hutchison says. “We spoke often with [the clients] about the quality of this courtyard. [The client] likes to call it his own Zen garden, although I think that he also likes that the courtyard facade serves to keep the numerous elk in the area at bay.” Concrete pavers, gravel, and ipe decking cover the ground.

“From the courtyard, you then enter the house proper, directly into the main living room,” Hutchison says. “From this room, you have a panoramic view looking out through the trees to the river, or back into the courtyard.” The wood-burning fireplace, from Majestic, is clad in steel panels. Eames Molded Plywood lounge chairs sit side-by-side in the living room.

The home’s interior design was intentionally simple: access to light and views were a main priority. “The roof in this room slopes gradually up to the south, providing a light monitor that brings in southern light filtered through the trees, while providing a framed view of the tops of the trees beyond,” Hutchison says. Plank flooring by United Tile and Edge wall sconces by Belfer unite the living and dining spaces.

“The roof structure is exposed in every room of the house, which leads the eye to connect all of the rooms together, making the house seem bigger than it really is,” Hutchison says. Dunn Lumber supplied the laminate shelves for the study.

“They wanted to keep the house to one level so that they could retire there without worrying about stairs and access,” Hutchison says. The home features two bedrooms, and the second one is available to guests and the homeowners’ college-age son.

A fireplace can be used on the rear patio and in the living room, making it feel like one cohesive space. Ipe planks, the same wood that’s used in the front courtyard, cover the floor.

After years of visiting the area as vacationers, one couple builds this striking home for their retirement outside Greenwater, Washington. A fireplace can be used on the rear patio and in the living room, making it feel like one cohesive space. Ipe planks, the same wood that’s used in the front courtyard, cover the floor.

The Andersen Architectural Collection’s Eagle windows and doors provide the panes and passageways of the home.