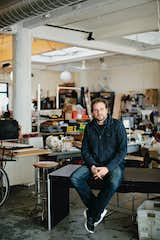 Mitchell Joachim sits in the Brooklyn studio of Terreform ONE.

"Urbaneering Brooklyn," one of the nonprofit's conceptual projects, imagines the New York borough 100 years in the future.