When the owners found the house, it was severely neglected, structurally unsound, and thoughtlessly stripped of architectural detail. At the exterior, imitation stone-asphalt shingles blanketed the facade in a confused mosaic pattern. Through the exterior overhaul, the team intentionally “avoided using ornate moldings or superficial references to traditional forms,” explains Bangia. Integrated with the classic molded bricks, oversized windows, flanked by honed bluestone sills and lintels, offer subtle hints to the modern interior to be unveiled inside. 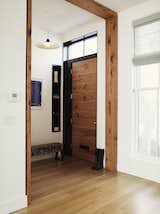 A common theme of the remodel was the incorporation of salvaged material, both from the original house and outside sources. Collaborating with Peter Buley of Analog Modern, the original hemlock fir joists of the house were repurposed into the main entry door. Adjacent to the door is a bench made from a heart pine beam, sourced by Buley. The beam had been charred during a circa-1900 fire, and subsequently painted over during the last 100 years. The unique piece now finds its home in the entry foyer.

On the first floor, the kitchen features simple white IKEA cabinetry juxtaposed with a natural wood surround for the hood, also repurposed from the original fir beams. 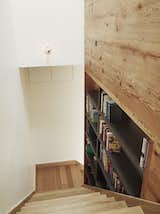 Creating a library along a staircase out of open shelving means that the books can be accessed from both the staircase and the stair hall on the other side. 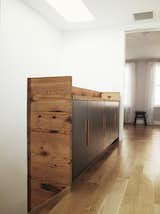 On the top floor, the bookshelf becomes a storage cabinet at the entry to the master bedroom. A well-placed skylight illuminates the staircase. 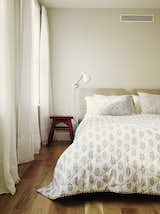 The master bedroom features shorter planks of five-and-a-half-inch-wide white oak flooring. Their warmth is enhanced by the wall color, Benjamin Moore Abalone, the only departure from white anywhere in the house. The bed is from CB2, and side table is from Environment 337. 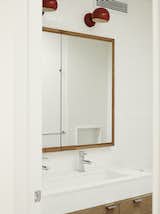 Another incorporation of the original fir beams can be seen in the bathroom’s medicine cabinet frame. An oak vanity and David Weeks Studio Boi sconces complete the space. 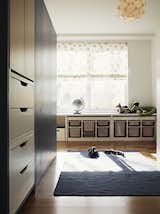 Opposite the master bedroom on the top floor lies the sunny kids’ bedroom. A double-sided wardrobe provides storage, and functionally divides two separate sleeping areas. Further storage is placed along the window wall that faces the backyard. 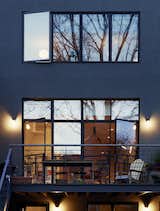 The rear facade is a surprisingly modern counterpoint to the traditional front. Here, traditional brick is traded for modern stucco.