Mark and Beth followed Apple's model: inviting people into a physical space to experience the brand. "On a very micro level, that process worked for us," Mark says. The name was also inspired by Apple. "I'm not an institutional kind of guy," say Mark, who dropped out of design school when he shopped his portfolio around town and landed a logo and t-shirt gig for a local record store. "It'd be nice to have something hanging on the wall but all my heroes are dropouts, took life by the seat of their pants, and made things happen. That's been a motivation, all those wacky people who had more vision than common sense." 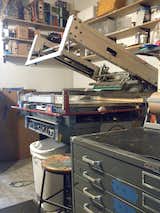 The real reason for having the space is the printing studio that occupies the back third of the 650-square-foot store. "We needed somewhere to house everything," Beth says. "We could either have gotten a studio and relied on online sales or gotten a studio in which we also did retail. We figured if the store didn't do well we could close off the front and keep the space for our workshop."

By 2005, Mark and Beth were printing their own posters and in 2006 they exhibited at Flatstock for the first time (and have returned every year since and will be there again this year). In September 2006, they opened their storefront.