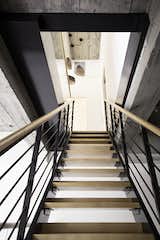 Although the two apartments were stacked vertically, their individual systems and layout were quite different. The limited horizontal overlap meant that the owners and design team had to give careful thought to the connective elements, and how the family would ultimately circulate through the home. One of the key pieces to the puzzle was finding a place for the interior stairs. Says Bangia Agostinho principal Anshu Bangia, “There was a challenge to find an appropriate location to cut a new stair opening between the apartments, and then have the new stair coordinate with the existing one to form a logical sequence of circulation between the three levels.” 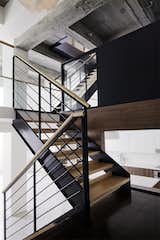 The switchback stairs create a circulation pattern that, according to Bangia, is "noticeably different than what you would find in a typical Brooklyn town house." She adds, "It lends an element of surprise when moving between floors, and a dynamic spatial sense of expansion and contraction.” 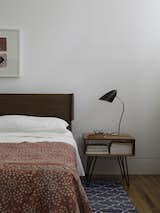 An intricate coverlet over a white cotton duvet on a Design Within Reach bed adds a pop of color in this clean, simple room. 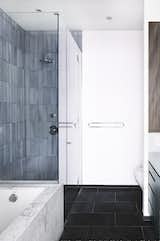 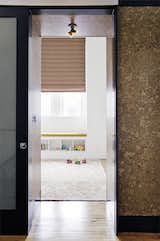 On the second floor, the sliding door to one of the kids’ bedrooms lies flush with a cork-wrapped wall. In the bedroom, a colorful custom Maharam window shade rests above a window seat with a Kvadrat cushion. 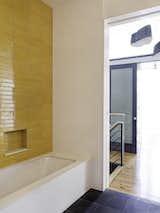 In the kids’ bath, Ann Sacks slate tile is again used on the floor, while Heath tile in a more playful Mango hue makes for a cheery wall feature. The tub is wrapped in Celador quartz, which continues up the surrounding walls. Tom Dixon Felt pendant lights hang outside the second-floor hallway. 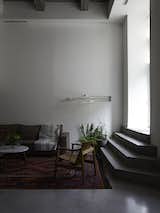 The spacious living room is another of the owners’ favorite spaces. “The double-height ceilings in that room create a very expansive feeling. No matter how many people are in the space, it still feels very open and airy,” says Susan. The soaring 17-foot-high concrete ceilings are original to the schoolhouse, though they were likely not exposed in the same way at that time. A Kilim rug over heated radiant floors bring visual and thermal warmth to the space. A BoConcept sofa and From the Source lounge chair define a seating area, accented by David Weeks Studio hinged wall light.

The living room leads to a private outdoor patio. Before the renovation, the slightly below grade area was in plain sight to passersby, as it lays adjacent to the public walkway into the building. This less-than-ideal setup was addressed in the redesign by adding a slatted cedar perimeter fence, along with tall trees and shrubs. Clever hidden doors conceal patio storage under the entry walkway.