Architect Alfredo Vanotti sourced the home's stone exterior from the woods behind the property. “I believe that mountain architecture is an emblematic example of sustainable architecture,” he says.

Reinforced concrete stands behind the stone facade to provide insulation. Vanotti wanted to focus this project on the simple materials of concrete, natural larch, iron, and wood.

“The inside is, for the most part, concentrated on the local craftsmanship, because I believe it is very important,” Vanotti says. “It represents our history.” Artisan Vanotti Mauro built many parts of the building, including its most prominent feature: the larch wood accents. A custom fireplace warms the living room.

The ground floor is comprised of a living room, kitchen, and bathroom that are all detailed with larch wood. In the kitchen, a retro Bompani refrigerator and freezer blend in with the minimal aesthetic. 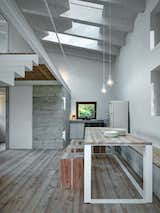 A pair of matching Idea lights by Vesoi over a dining room table and chairs, both locally-made. 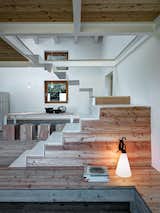 The stairs are made of iron, which was coated with white paint from San Marco. 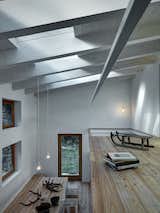 As per the owner's request, the second floor’s open landing receives ample sunlight. The space is used as a study and the home's two bedrooms are situated to the right, their doors just outside the frame.

Views of the Orobie Alps can be seen from the home’s windows, which also feature larch frames. A lampadina light by Flos sits on the nightstand.

The positioning of the home’s roof allowed for a double-height, north-facing wall with four matching windows and an accompanying skylight. “The house refers to rural houses: a sloping roof, completely coated by stone and with no eaves,” Vanotti says.