To create uninterrupted views of the sea throughout the interior, the architects implemented sliding glass doors as partitions. This also keeps the interior plan feeling open and airy.

The remodel involved restoring the concrete ceilings, parapets, terrace stairs, and pergolas, down to each vault, arch, and corbel. The grandiose Baroque balustrades had to be replaced by filigree post banisters. 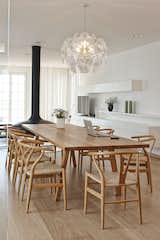 The interior scheme prevents clutter in a variety of creative ways, including concealing a heat pump in the walls and installing flush-fitting LED spotlights. The architects explain, “Since the redesign, the prevailing impression is one of spaciousness, the suffusion of light and simple elegance.” A statement-making Hope Suspension Light by Luceplan is an elegant addition to the living area. The table, which was designed by the architects and fabricated by VHB Memmingen, is surrounded by CH24 Wishbone Chairs by Hans Wegner for Carl Hansen & Son.

One of the biggest parts of the remodel was removing walls on the ground floor to make space for more of an open plan. The hanging steel Gyrofocus Fireplace by Focus gives the living room a unique character. It's flanked by a Delphi sofa from Erik Jørgensen.

The kitchen features Miele and Bosch appliances surrounded by oak flooring from Bois Ditton; the shelves are walnut.

Glass elements not only allude to the ocean, but also lend a fresh look to some of the rooms. Here, Trend glass mosaic tiles brighten up the bathroom. Axor fixtures from Hansgrohe stand next to a minimalist radiator from Zehnder.

The swimming pool was reshaped and refinished to blur the transition between deck and rocky outcrop. Beyond the pool is the villa’s private beach, framed by lush vegetation.