The recycled shipping containers were sourced from the Pacific Port of Caldera in Costa Rica. “Discarded shipping containers are all over the world and cost relatively little,” Saxe says. “With a bit of creativity and understanding of local building techniques, the interiors can be modified for any client.”

The home was built by two construction workers and the couple themselves, who were familiarized with the construction process and had backgrounds in industrial engineering. “We did not have blueprints for this design, and created only a 3-D model to guile them along the way,” Saxe says.

Set slightly apart, each container is installed on pier foundations. 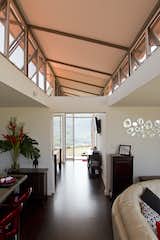 Wood floors were installed throughout the entire house. Walls are formed by simple plasterboard partitions, and enhanced with industrial-grade insulation.

The kitchen cabinets were bought at a local hardware store. The couple changed the door handles for a more modern look. The home’s furniture was brought in from a previous residence.

Spectacular views continue even in the bathroom, located at the far end of the home. “We managed to change a family’s life by shifting the paradigm of what it means to own a home,” Saxe says.

The roof of this residence was made from scraps taken from the sides of the shipping containers. Its slanted design creates a wind tower effect that provides natural ventilation and negates the need for air-conditioning.

The containers’ sides and ends were removed to make way for large, aluminum-framed clerestory windows that provide sweeping views of the east and west.