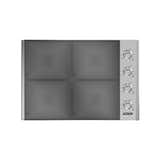 Bring your kitchen into the 21st century with this powerful induction cooktop from Viking Professional. Four induction elements utilize a magnetic current to induce heat directly in the pan, resulting in faster boils and searing and less residual heat on the cooktop surface. Each burner is capable of an impressive 3,700 Watts of power and turns down to a low simmer, giving you total freedom in what you want to cook. The new beveled edge design looks sleek and makes the TransMetallic Ceramic Surface even easier to clean. The exclusive CoolLit LED lights illuminate the cooking zones when in use with Viking's signature blue.