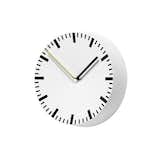 After having lived and worked in Milan for Lissoni Associati, American designer Shane Schneck founded his own Stockholm-based studio in 2010. Since that time, Schneck’s work has received international acclaim in the form of iF, Red Dot and Wallpaper awards. Inspired by, of all things, a vintage barometer, his boldly styled Analog Clock unabashedly protrudes from the wall. It features a striking concave face, large rod-shaped hands and crisp markers. Made in China.