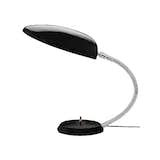 Winner of the Good Design Award 1950. Grossman was highly influenced by European Modernism, which had been imported to the US by influential architects, such as Walter Gropius (founder of the Bauhaus) and Ludwig Mies van der Rohe. Grossman, in turn, played a significant role in defining the aesthetic of mid-century Californian Modernism.

In 1950, the Cobra lamp won the Good Design Award and was subsequently exhibited at the Good Design Show at the Museum of Modern Art. The classic Cobra lamp takes its name from the shape of the oval shade, which is reminiscent of a Cobra's neck. The tubular flexible arm can be bent in all directions and the shade can be rotated through 360 degrees.

The base is covered in powder-coated aluminum and weighted with a cast iron ballast. The Grossman Cobra Table Lamp is available in six shades and has a switch integrated into the base. Ships with approximately 67" of cord.