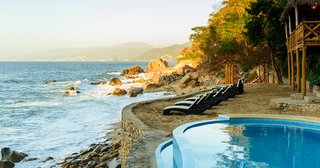 Yearning to get away from it all? Puerto Vallarta probably isn’t quite the first place you’ll think of. But then ther’s Xinalani, a gloriously secluded eco-resort wedged between the jungle and the water. Technically, it’s in Puerto Vallarta, but it’s actually twelve miles down the coast from the city proper, and only accessible by boat — which makes all the difference. Pick up what you need before boarding, and put an auto-responder on your e-mail: there’s no Starbucks near the hotel, nor a consistently reliable wi-fi connection. There’s also no air-conditioning, no television, no complimentary in-room iPad. The point of coming to Xinalani is to get away from all of that and enjoy the sand, sun, and sea. Well, it’s the bay, technically, the large, crystal-clear Banderas Bay on Mexico’s Pacific coast.

Xinalani is a peaceful retreat geared toward yoga enthusiasts. But even if you’ve no intention of getting into Warrior pose or Downward Facing Dog, you’ll be in heaven here, so long as you’re into the great outdoors and the resort’s low-impact approach to the environment. The natural landscape surrounding the place is Xinalani’s main attraction: even the 23 guest rooms, situated within a series of palm-thatched cabins, are open-air. Each has just three walls and a curtain that you’ll probably leave open most of the time, the better to catch a sea breeze or gaze at the thousands of stars twinkling in the night sky.

Standard rooms have open-air showers, artisan-made writing desks, and private balconies with views of the jungle and the bay. Suites are actually casitas, private and free-standing, some with extras like pillow top beds and hammocks, not to mention silk mosquito netting.

Before or after yoga classes — on Xinalani’s Sand Terrace, treehouse-like Jungle Studio, Meditation Cabin, or Greenhouse — there’s a bright and healthful buffet breakfast in the waterfront restaurant. Go for a massage at the spa or join a shaman-led ceremony at the hotel’s very own sweat lodge, built into the rocky cliffs by the beach. Or you can skip the activities and just go for drinks and a swim at the beach club. Sure, it’s a yoga retreat. But you can just lie flat on your back, too. If anyone asks what you’re up to, say you’re working on your Shavasana — the Corpse Pose.