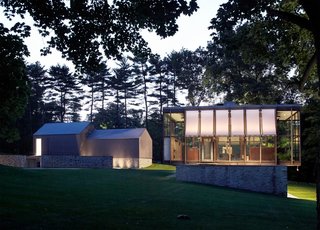 The influence that Philip Johnson had on midcentury architecture in New Canaan, Connecticut is undeniable. While his iconic Glass House usually garners the most attention, there are also five other modern homes he designed in the area—one of which is waiting for someone new to move in.

Lucky for prospective homeowners who are looking for an iconic gem, the Wiley House is for sale after being in the hands of the same homeowner for more than 20 years. Since the property has been on the market for a little more than a year, the price has dropped from $14 million to $12 million to reflect current market conditions.

Johnson built the Wiley House at a time when the midcentury movement was booming, especially in New Canaan. While more and more architects were beginning to build minimal structures that fit into the surrounding nature, his second glass pavilion-style house was born. Unlike the Glass House, which has become a cherished relic, this home has endured through multiple life stages and has had to adapt over time.

About ten years ago, homeowner Frank Gallipoli—the president of Freepoint Commodities—recruited architecture firm Roger Ferris + Partners to make some much-needed updates. One of the biggest projects Roger Ferris took on was to transform the 19th-century barn that had been on the property when Johnson bought it. Gallipoli wanted a place to store his extensive art collection, so it was turned into his own personal gallery. Ferris also restored the main house as well as built a pool house and a new garage.

Built in 1953, the Wiley House is made up of a single glass-and-wood rectangular pavilion that’s perched on top of a rectangular box made of stone and concrete. Johnson chose the six-acre plot of land himself and was particularly fond of the natural slopes of the site, which is surrounded by hickory trees.

Taking a peek into the new pool house that helps enclose the area, you can see how the sloped land and the original stone walls allow it to remain surprisingly hidden from the outside.

Shown here is a view of the stone and concrete structure that supports the cantilevered glass pavilion. The bottom section holds four bedrooms, bathrooms, and a sitting room. The glass and wood pavilion on top houses a combined living, dining, and kitchen space—all which is surrounded by 15-foot-tall windows.

The stone treatment works as a connecting factor throughout the property and preserves a building practice that was common at the time.

Out of the 3,544 square feet of the residence, 1,000 square feet of it comes from the pavilion. The corner of the open living room contains a suspended fireplace, oversized German speakers, and a pair of Barcelona chairs by Ludwig Mies Van Der Rohe.

Take a peek into the edge of the 19th-century barn that Ferris transformed into a gallery. The traditional barn structure was retained while the interior was turned into a minimal and open canvas for the current homeowner’s art collection. It’ll be interesting to see how the next owner utilizes the space.

Since the large windows had gone through some harsh wear and tear over the years, Ferris decided to replace the old window panels with new double-paned windows while following Johnson’s original drawings. Ferris personally knew Johnson and made sure to stick to his vision when restoring the house.

Shown here is the sitting room from the bottom half of the main house. As an art collector, the current homeowner has filled the entire interior with bold statement pieces.

The new pool house and transformed barn that were created by Roger Ferris + Partners during a recent renovation, work together to create a courtyard that borders the original swimming pool. While a very similar circular pool can be found at the Glass House, this one features a lily pad diving platform that's finished with red tile.