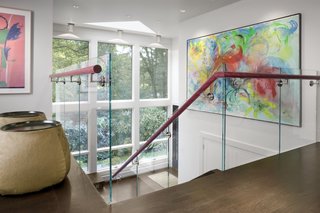 Having resided in this house nearly 30 years, the owners found its layout lacking functionality and its highly stylized decor and finishes dated. With an eye towards possibly selling the house, they enlisted Ruhl Walker Architects to conceive a more open, functionally casual floor plan, a warmer, more soothing palette of materials and a more welcoming entry.

The project revolved around modifying a confusing entry sequence and completely reworking a large kitchen as the new de facto ‘living room’, as it has become in so many households. Ceilings were opened, structure reconfigured, and ductwork moved to create a series of open spaces, each with defined functions, with the kitchen at the center of all activities.

The kitchen was designed to connect and visually organize the adjacent sitting dining, living, and family rooms, allowing each to maintain a distinct identity while also allowing them to function as an informal and inviting series of spaces. A large kitchen island creates an efficient layout to organize the activities of one or several cooks; all cooking and clean-up activities occur in a single well-organized line, with multiple workstations and all associated appliances and storage within arms length. An integrated dark oak plank table creates a casual dining option while encouraging people to linger in the kitchen before or after mealtimes. The design favors tall pantry-style cabinets instead of upper cabinets, which provide abundant storage while preserving open sightlines.

Walker Architects uploaded Weston House through Add A Home.
Add your own project for the chance to be featured in Editor’s Picks.