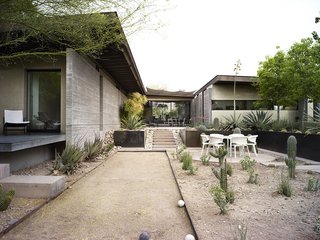 Set on a winding street and screened by clusters of creosote bushes and palo verde and ironwood trees, Ethan Wessel and Sarah Swartz Wessel’s Phoenix residence does little to call attention to itself. And that suits them just fine. “We’ve come back from the airport and the driver will ask, ‘Where’s the house?’” Ethan says. But step through the gate, and the front courtyard opens to a breathtaking vista clear through the living/dining room to the rear patio and beyond to a custom skate bowl.

As evidenced by that last feature, the house is not just a family home for the designers and their sons—Addison, 17, and Elliot, 13—but a richly personal expression of what intrigues and delights them. Designed over the course of 10 years and still a work in progress, the house and garden have become a kind of canvas on which the pair explore, experiment, and even make mistakes. “It’s our testing ground,” Ethan explains.

Juxtaposed with limestone floors, wood-beamed ceilings, and walls of hand-troweled plaster and board-formed concrete, glass is strategically placed throughout the 4,000-square-foot expanse to frame slivers of landscape and sky or open wide to reveal gardens of various sizes, which the couple also designed. Rooms spill onto patios that become extensions of the house. “People think simply putting in a door or a window will connect the interior and exterior, but it’s more than that,” says Sarah.

The home’s thick, textured walls are a modern nod to traditional adobe buildings; their mass ensures a cool respite from the scorching summer heat, while deep overhangs offer additional shade. “Poured-in-place concrete is a very appropriate material here,” Ethan notes. “And it blends into the desert palette.”

The couple met while attending Arizona State University’s architecture school. Though both hail from elsewhere—Sarah from Washington State and Ethan from Connecticut—they remained in Phoenix and launched the architecture firm Tennen Studio in 2001 and Tennen Construction a year later. “Tennen is a really old Japanese word meaning ‘existing in nature’ or ‘coming from nature,’ ” says Sarah. “That’s very significant to us. Nature is not just living things and plants. It’s that you let things happen naturally and embrace nature.”

For the Wessels, tennen is more than a design philosophy; it suffuses everything they do. Their fascination with Japanese culture and design sensibilities extends to the line of incense burners and Japanese incense they recently began producing.

After buying the property in 1998, the couple stripped down its undistinguished 1950s house and lived in it for about a year before making any major changes. They studied the light, built models, and talked about how they wanted to live. “We wanted a home for ourselves,” says Ethan, “but we also wanted to create something that would show what we could do.”

Tearing down the old house, save for one wall, they began with a footprint in the form of a lowercase “h,” its core containing an open living/dining space that extends to a study and a sitting area that overlooks the front courtyard. As their work evolved, so did the house, which grew, according to their master plan, to a capital “H” with the addition of a master bedroom wing. Along the way, they redid the kitchen and transformed the playroom into a music room and the family room into a tea room. “Nothing is set in stone,” Sarah explains.

The skate bowl, created by X Games veterans CA RampWorks and decorated by local graffiti artists, is a place where Ethan and the boys can carve and grind or just hang out with family and friends. “It’s also a fort for teenagers who no longer want a playhouse,” says Sarah. “They’ll take blankets and pillows and lie in the bottom and look at the stars.”

Organic vegetables flourish nearby, planted each season with help from the sustainable gardening consultants at Phoenix-based Farmyard. “My parents always had a garden,” Sarah says. “The idea that my kids never understood where their food came from tugged at me. The boys are very involved in it—they do the harvesting and bring the vegetables up to the house.”

Whether they’re augmenting their skatepark, planting a memory garden, or punching out a wall to open up a new vista, the Wessels find that designing for themselves teaches them that architecture isn’t static, and it’s a lesson they pass on to their clients.

“Sometimes we’ll do something and regret it, but not very often,” says Sarah. “We’re much better at making decisions that are really instinctual.”

Shaded by an awning from TSM Systems and furnished with Sol y Luna pieces from Design Within Reach, the rear patio is a favorite spot for meals.

The Phoenix home of designers and builders Sarah Swartz Wessel and Ethan Wessel sits amid desert-friendly trees and plants. The couple bought the property in 1998 and worked on the house for a decade.

"In the beginning, we didn't have the finances to tear it down and build everything we wanted, but we knew the house would grow with us," Sarah explains. "It has an open floor plan, yet within that are spaces defined by their relationship to the outdoors."

Sarah and her sons prepare a meal in the kitchen, which the Wessels recently upgraded with Bulthaup cabinets, counters, and sink. The stovetop is from Gaggenau and the faucet is from Dornbracht. On the far wall is one of Yoshitomo Nara’s signature eye-patch portraits.

In the dining area, chairs found in an antique store join a table the Wessels made from a piece of mesquite. Overhead is Lindsey Adelman's Branching Bubble fixture.

Board-formed concrete walls create the core of the house and establish its organic feel. "There’s really no other cast-in-place concrete on the street," says Sarah, "but you don’t even see it until you’ve made it through the front courtyard." There, beneath a deep overhang, the couple designed a jagged pathway cantilevered over a water inside and reflections of light into the sitting area.

The lacquered console is by Robert Kuo.

The bocce court sits between the master bedroom patio and an outdoor dining area featuring Jean-Marie Massaud’s Seashell chairs from Dedon. To bring in natural light while limiting direct exposure, the couple designed a horizontal window for the music room.

Beyond the bocce court is the skate bowl, which the Wessels designed with CA RampWorks.

The vegetable garden produces everything from cauliflower to arugula and Italian parsley.

In the music room, skateboards are stored below spray paints the family and friends use to decorate the skate bowl.

Addison stands on the deck of the bowl above graffiti art by Lalo Cota.