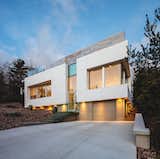 Webster Terrace was a renovation project to a single family home in the south end of the Halifax Peninsula. The original house, built in 1961 by architect Douglas Shadbolt, is situated on a steeply sloping site, which is oriented towards Fleming Park and the Northwest Arm. The existing form comprised of two angled bars that stepped down the site’s topography towards the street. The low-er southern bar consisted of public spaces (living, dining and rec room) while the slightly elevated northern bar was nestled into the hill and contained the private spaces (bedrooms) of the house. Both volumes had shed roofs that intersected at a continuous skylight, which provided natural light into the center of the plan. The building envelope had tall south facing windows and was clad in shiplap wood siding and stone veneer.

From the clients’ perspective the square footage of the existing house (2500 sf) was insufficient, the home failed to capture the view, the plan was fragmented, the internal spaces did not accentuate the distinctive qualities of the shed roofs and the formal appearance was dated. Based on these criteria the client emphasized the necessity for a complete remodeling of the house and presented our team with the following challenges;

1. maximize the area of the house and optimize the view of the Northwest Arm
2. create an open concept that gives more presence to the spatial qualities of the large sloped ceil-ing plane and provides opportunity for gathering
3. devise a construction strategy that kept the house weatherproof during its transformation
4. incorporate energy efficient systems
5. develop a contemporary formal appearance with minimal maintenance

Our response to the first challenge was to increase the area of the house by adding an addition to the main level (200 sf) and designing a second storey (1100 sf) above the existing shed roof. These additions were strategically located to capture the view, while reaching the upper limit of the gross floor area ratio provided by the local Land Use By Law. The main level addition included kitchen and dining space while the second storey consisted of a gallery space along the north and two bed-rooms that spilled out onto a rooftop patio to the south. The resulting rooms provide a clear view of the Northwest Arm ocean inlet. In terms of urban design, the new additions are located such that they preserve the views from neighboring properties. They take full advantage of the sharp slope toward the water on which the house is situated allowing the upper level of each home to see over the top of the next.

The second challenge was met by removing the majority of the interior partitions on the main level, exposing the diagonally sloping ceiling plane even more than before and creating a set of wide stairs that serve as gathering seats for entertainment. The lower end of the sloped ceiling was further accentuated by mimicking the profile of the wide stair on the ceiling plane, which enhanced the ex-perience of the users when moving from one level to the next. The resulting open space also provid-ed the opportunity to highlight the connection of the house to the site’s topography by aligning the exterior and interior stairs along the central access of the house. This provided an unobstructed pathway through the house and enhanced the procession up the hill.

The removal of interior partitions on the main level and the addition of a second storey required new steel structure to be incorporated into the house. In order to keep the house weatherproof, the third challenge was met by devising an 'eye of the needle' structural strategy. New steel structure was craned over the power lines, threaded through minimal openings in the existing shed roof, aligned onto newly poured concrete piers, and weatherproofed the same day. The floor of the second sto-rey is suspended over the existing sloped roof plane with new steel beams, creating a useful storage space underneath. The new upper deck is also structured to hover over the old shed roof allowing the existing roof to serve as the primary drainage plane.

To meet the fourth challenge, the envelope of the existing house was stripped internally and both the old and new walls were insulated with high-performance spray foam. All windows are new, low emissivity, aluminum-framed with thermal breaks. The hydronic heating system of the house was upgraded and extended to serve the upper level addition. Additional heating and cooling was sup-plemented with heat pumps. All lighting and HVAC components of the house can be controlled re-motely and are programmed to adapt to local climate patterns in order to conserve energy.

The contemporary formal appearance of the house was achieved through a sequence of architec-tural surgery to meet the fifth challenge. These steps included removing the existing eaves of the shed roofs, constructing the new additions, building out or ‘squaring off’ the façade and minimizing the material palette throughout. The resulting form consists of a wood box that sits on a white shell, which wraps the volumes of the existing house. The new design also enhances the distinctive angled plan of the existing house: the window planes are angled towards the view while the wood box and white shell remain parallel to the street. To reveal unobstructed views of the Northwest Arm, the en-velope consists of zero-edge glass detailing on the corners at both levels. The large expanses of glass on the east elevation were achieved with concealed fire shutters on both levels. The exterior cladding is a combination of thermal wood and fiber cement panels with no exposed fasteners on the entire house. The landscape is zero maintenance river pebbles, allowing the client to leave the house unoccupied for weeks at a time.

In summary, the Webster Terrace house was a daring and contemporary form in its younger days and it has been rejuvenated with expanded spaces with improved access to views, a sleek twenty-first-century form and materials detailed in the most minimal manner.

Justin Cormier uploaded Webster Terrace through Add A Home.
Add your own project for the chance to be featured in Editor’s Picks.