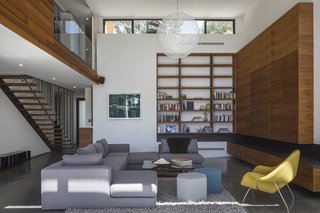 Building smarter is at the heart of everything designers Tryggvi Thorsteinsson and Erla Dögg Ingjaldsdóttir do. Whether they’re testing the limits of indoor/outdoor living or developing a prefabricated wall system that they hope will make traditional wood framing a thing of the past, the founders of the Santa Monica design studio Minarc are consumed with making structures stronger, lighter, and more efficient.

It was just that kind of innovation that led Jaclyn Lieber and her husband, Jay, to hire the Iceland-born duo. The Liebers had purchased a two-bedroom, one-bath teardown in Culver City, California, and were intrigued by prefab’s promise—from the streamlined construction process to the chance to design a house they could actually afford. “We weren’t planning to build,” says Jay, “but we couldn’t find any houses that worked aesthetically or financially.”

After walking the 6,100-square-foot property, the designers took time to get to know the couple and how they wanted to live. Topping their wish list was a house with three bedrooms, lots of glass, and ample places where they and their children—Lucy, 15, and Leo, 13—could hang out together.

There was no question how the house would be constructed. In 2007, eight years after they formed Minarc, Thorsteinsson and Ingjaldsdóttir launched mnmMOD, a customizable building system of prefabricated panels that minimizes energy consumption and dramatically reduces a home’s carbon footprint. A blend of 30 percent recycled steel and cradle-to-cradle certified extruded polystyrene, the components are all manufactured locally. Once on-site, they can be assembled using only a screw gun.

“You’re designing exactly the same but with totally different materials,” Ingjaldsdóttir explains. Continues Thorsteinsson, “We’re big believers in architecture. Early in our practice, we saw people doing the same things over and over again. We asked ourselves what would happen if you created standardized panels and allowed people to organize them differently. You’re using mass production, but every house doesn’t have to be the same.”

For Jay and Jaclyn, the team created a two-story residence built around a core consisting of a double-height living room, a dining area, and a kitchen. Glass walls on the rear facade open up the house to the backyard, which has a swimming pool, several eating areas, and a basketball court.

A floating staircase off the entrance that appears to be suspended by slender steel rods leads to the bedrooms. “The second floor is private,” Ingjaldsdóttir emphasizes. “When guests come in, they don’t feel like they should go up the stairs.”

Rather than conceal it inside the walls as framing, wood is displayed judiciously. There’s cedar on the exterior and walnut inside. “It’s not that we’re against wood,” says Thorsteinsson. “In Scandinavia, we are woodworkers. But we’re against using wood for framing and things you never see.”

Though they’ve lived in the U.S. for more than a decade, the designers have also completed design projects in their homeland, including the Ion Luxury Adventure Hotel, which rises from an otherworldly Icelandic landscape of lava fields and geothermal springs.

Glaciers and volcanoes may not be part of the scenery in Culver City, but there are nods to such natural formations nevertheless—panels of blue glass in the kitchen, actual lava rocks on the roof, a horizontal cutout on the front facade that looks like an abstracted waterfall.

“What I love about Erla and Tryggvi’s choices is the simplicity of the materials,” says Jaclyn. “They believe in art, and they see their homes as art pieces. Our home is like a totally functional piece of art.”

A pair of Icelandic prefab pioneers deliver an efficient family home in Culver City.
Building smarter is at the heart of everything designers Tryggvi Thorsteinsson and Erla Dögg Ingjaldsdóttir do. Whether they’re testing the limits of indoor/outdoor living or developing a prefabricated wall system that they hope will make traditional wood framing a thing of the past, the founders of the Santa Monica design studio Minarc are consumed with making structures stronger, lighter, and more efficient.

Jay and Jaclyn Lieber worked with Erla Dögg Ingjaldsdóttir and Tryggvi Thorsteinsson of Minarc to design a house using the designers’ mnmMOD panels, which can be assembled with a screw gun.

Jay and Jaclyn Lieber worked with Erla Dögg Ingjaldsdóttir and Tryggvi Thorsteinsson of Minarc to design a house using the designers’ mnmMOD panels, which can be assembled with a screw gun. The core of the home was kept open to maximize natural light. Clerestory windows, walnut cabinetry, and concrete floors define the living room, which features a sectional by Jessica McClendon of Glamour Nest, who consulted on the furnishings, a Nesta rug from Design Within Reach, a Moooi Random Light from YLighting, and Hecks ottomans from Blu Dot.

In the kitchen, a blue glass backsplash evokes the designers’ native Iceland. The Bend Goods stools are from YLiving.

Silestone counters, walnut cabinetry, and Refin floor tiles accent the master bathroom. The Axor Uno faucets are from Hansgrohe, the Alinea vanity light is from Aamsco, and the shower head is by Jaclo.

Built-in storage keeps things organized in Leo’s bedroom, which contains an Ella bed from Room &amp; Board and an Inmod duvet.

A Structures S7 lamp from Ameico lights the master bedroom.

Working with contractor Mike Stayer of Core Construction, the designers created an indoor/outdoor environment for the family. The kids hang out while Jaclyn helms the grill from Barbeques Galore. The Eos Collection dining set is from Design Within Reach. An Element coffee table from CB2 occupies the covered patio.

The second-floor niche, which is lined in Osborne &amp; Little fabric, offers a quiet getaway.

The designers used wood sparingly for maximum effect, like the cedar siding on the front and back exteriors. The main facade offers a glimpse through the house to the backyard, which was made larger by placing the garage closer to the street. “We hosted a concert and had people sitting inside and in front of the pool,” says Jaclyn. “The house completely lends itself to entertaining small and large groups alike.”