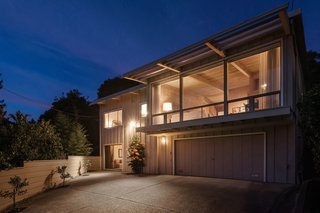 Dr. John and Eunice Jackson moved to Berkeley from Philadelphia in 1957, but didn’t discover 760 Spruce until 1968 when they needed more space for their family of five. According to the Jacksons, this modernist home was built in 1955 by a local architect and was custom built for his mother and her caretaker with a no-step entry, 3 bedrooms, 2 bathrooms and laundry on the same level. Downstairs includes a large rumpus room and full bathroom, a perfect place for the Jackson teenagers to hang out. You might also explore converting the lower level into an au-pair unit. This property that runs from Spruce to Montrose has been the family hub for nearly 5 decades. Family, friends, spouses, and grandkids have all enjoyed big holidays and anniversary celebrations in this well-preserved home, and the Jacksons hope the next owners can share the same measure of joy, laughter, and contentment in the space.

uploaded Vintage Hollywood in the Berkeley Hills through Add A Home.
Add your own project for the chance to be featured in Editor’s Picks.

Rear exterior, the bank of windows have views of palm trees and slices of the Bay and San Francisco.

One of the bedrooms at dusk

Front patio with a view of the kitchen

Eat-in portion of the kitchen

Front view, set back from the street with mature landscaping

Ariel view of the property with the Bay

One of the bathrooms with starburst tilework, that the homeowner says is original with the home

Stairwell that leads down to the rumpus room, garage and large utility room.

Side by side GE ovens were lovingly used and preserved