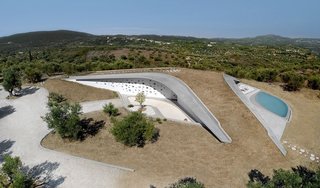 This summer home literally draws a "Y" on the landscape and is built on an olive tree-covered hill facing Greece's shimmering Finikounda Bay.

Villa Ypsilon is located in the Greek seaside village of Messenia, which is about an hour-and-a-half drive from the town of Kalamata. Aptly named, the residence was inspired by the shape of the letter "Y"—or ypsilon, as it's called in Greek. On the exterior, the green roof acts as an accessible extension of the terrain. Meanwhile, the interiors are framed by the most enchanting views of sinuous rolling hills and endless blue skies.

Though the structure takes inspiration from its very Greek concept, the house was intentionally designed without all the clichés associated with a vernacular Greek vacation home. The villa is composed of three sloping branches that create a seamless transition from the ground to the rooftop, which is easily accessible to the residents.

Seemingly carved out the home's main volume, three external courtyards shape an unbroken promenade that creates varying degrees of privacy and access to natural settings. On the rooftop, the inhabitants can revel in 360-degree view of olive groves, a nearby mountain, and the bay. Inside, the south-facing living room and pool patio frame the sight of the distant islands Schiza and Sapientza.

Architects Theo Sarantoglou Lalis and Dora Sweijd of LASSA Architects designed a concrete exoskeleton to fashion its unconventional shape. They had most of the components prefabricated and self-assembled off-site. Namely, a CNC machine enabled them to be experimental and explore various forms while designing the villa’s structural elements. This included the concrete shell formwork, the living room's acoustic ceiling, custom window frames, interior furniture, and partition systems.

"This ‘hands-on’ approach allowed for minimal use of commercial ‘off-the-shelf’ products, instead favoring locally-sourced materials such as concrete, terrazzo, and marble," says the architects.

Villa Ypsilon was inspired by the shape of the letter "Y"—or ypsilon, as it's called in Greek. Each of the branches descend from the center, gently sloping to meet the earth.

Inside, the home stands out from the traditional Greek design vernacular. Architects Theo Sarantoglou Lalis and Dora Sweijd experimented with different shapes to create the living room's acoustic ceiling and partition systems.