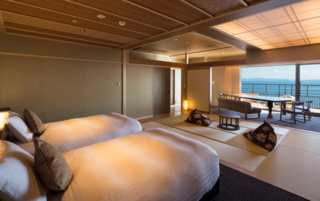 A spanking-new ryokan is a bit of a rarity, but that’s just what we’ve got in Villa Rakuen. Yes, it’s a modern, ten-story luxury hotel, but the classic ryokan experience is present in all the details: open-air baths made of wood or stone, tatami rooms alongside ones with Western-style beds, and, just outside most of the suites, private Japanese gardens. Get past the height and vintage of the building and it feels like a natural update of the old tradition. Expect food inspired by Awaji Island, where Villa Rakuen makes its home (and whose farms supply the Imperial household) as well as seafood taken from the sea just outside your window.

For while there’s plenty to admire within the hotel walls — starting with the inspiring contrast of the rooms’ sleek surfaces and clean lines with the warmth of their natural materials — it’s hard not to let your attention wander to what lies outside. That would be miles of sea and sky, the soothing backdrop to everything from the suites themselves to the public bath. The sound of surf, seabirds cruising by the windows, and breezes off the Inland Sea form as much a part of the ambience as the appropriately minimalist furnishings. There’s an emphasis on stargazing, too — a clever way, come to think of it, to turn a towering structure back toward nature — and the views are at their best in the so-called celestial balcony on the top floor. If you want to contemplate the heavens from the privacy of your own suite, opt for one of the Hoshi rooms, designed with a cutaway roof on the gazebo and rattan chairs with just the right pitch for picking out constellations.