The archipelago is an integral part of the villa.

Island kitchen is the heart of the villa.

See through idea of the villa.

Sauna is an essential part of Finnish mökki culture. 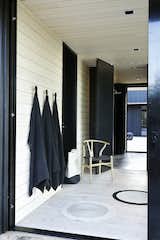 Sauna with a shower and dressing rooms are located in a separate building.

Villa Kivi is a new generation log home on a tiny island in Finnish archipelago designed for himself by Finnish designer Vertti Kivi. Polar Life Haus, a Finnish wooden house manufacturer, was quick to pick it up for their collection.

‘The whole development process of the house was guided by our goal to bring the interior of the house together with the spectacular surroundings. We wanted to be part of sunset, snowstorm and even autumn storm on his tiny island in Finnish archipelago’, tells designer Vertti Kivi, the head of dSign Vertti Kivi & Co.

‘The starting point was a clear glass cube but we ended up creating glass walls reaching from the floor level up to the ceiling only to three sides of the structure. The north side with its separate sleeping rooms and bathroom is constructed of massive black wood beams that are in clear contrast to the glass and create feeling of cosyness and safety. Large terraces in one level create a sense of continuity between inside and outside.

The floor plan is defined by Scandinavian clearness. The heart of the villa is the kitchen, located next to the entrance, and from there you can see the entire open interior and the surrounding sea. We like to think the kitchen island is like a DJ’s desk - the atmosphere of the whole interior space is created right there with the remote controlled lighting system. To guarantee the privacy of the bedrooms, they are located in the outermost corners of the villa, separate from each other. They too have one wall completely made of glass.

An extra attention is paid on the details of the villa. Not a single molding can be found in the entire building. The doors have a hidden frame and they too reach from the floor to the ceiling. Drama and strong feeling are created by massive wooden surfaces and their color choices - snow white lacquer on the floor creates a contrast to the dark walls.

To make the battened external walls coal black, we developed a special technique based on hundreds of years old Japanese traditions.

In the evening, the atmosphere changes with different lighting schemes that can be timed to be in sync with nature.

The end result is a clean-lined building in Scandinavian style which can be adapted to different needs and locations. It has a strong Finnish presence.