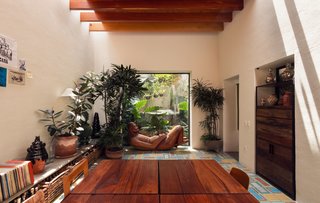 This town house situated in the ancient town of Tacubaya (now in the heart of Mexico City), is the result of renovating an old building that had been subjected to many modifications and adaptations throughout the years. It was even patched up to serve as a dental consultancy at one time.
It had thick adobe walls and a pleasantly proportioned internal patio. Strangely however, the internal areas were unrelated to the patio, since small doors led to a series of dark rooms with high-ceilings.

The new project is built around the original patio. Now, all the rooms – either adapted or constructed, are linked to the patio, giving vitality to what is now a new house. During the construction, a second floor was added for the bedrooms and an area was adapted for parking. The string of rooms was converted into one large space connected to the patio, to create the central focal point of the house.

The roofs were transformed. They reveal a series of interconnecting terraces and gardens that give an added dimension to the dwelling. The result is a new house full of light that seems to have always been there. Furthermore, the use of materials has been respected, such as the exterior walls painted in white lime where the rain has created a tear-stained patina. By respecting the original proportions of the patio and adding all the vegetation, the house demonstrates sensitivity to the necessities of its owners, as well as its historical environs.

uploaded Veramendi House through Add A Home.
Add your own project for the chance to be featured in Editor’s Picks.