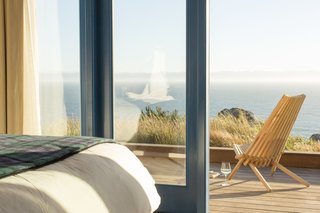 Perched on a dramatic bluff high above the Pacific Ocean lies Timber Cove: iconic, reimagined. A one-of-a-kind hotel situated within California's ruggedly breathtaking Sonoma coastline, Timber Cove is a magical place where stately redwoods pay homage before the vastness of the sea. Guests experience a deep connection with nature, both land and sea, while relaxing in a casual, sophisticated space.

At Timber Cove, warm hues, sturdy timbers, and midcentury accents create a uniquely captivating hospitality experience. The newly renovated structure retains the iconic architecture and authenticity of the original 1960's legend while bestowing the comforts and amenities of a new hotel. One part Hippie chic and two parts rustic modern, Timber Cove stands apart. The hotel features 46 newly designed guest rooms, including eight premium suites, which offer a variety of ocean views, sunset vistas, and refreshing forest panoramas. Enjoy the wonder and beauty of camping without sleeping on pebbles or worrying about wolves.

Timber Cove is proud of its rich lineage. Built in 1963 as a place of meditation and tranquility, Timber Cove was designed by famed architect and original owner Richard Clements Jr., who was inspired by Frank Lloyd Wright’s organic architectural style. Envisioned as a dramatic A-Frame structure, the original Timber Cove generously incorporated redwood and stone materials to create a timeless space that complements the local surroundings.

A friend of Richard Clements, the famed San Francisco artist and sculptor Beniamino Bufano, designed Timber Cove’s landmark obelisk, the Bufano Peace Statue Monument (originally named “The Expanding Universe”). Soaring 93-feet above the cliffs, the Peace Statue is an iconic symbol of beauty, spirit, and tranquility. Many other notable artists have been drawn to Timber Cove, including renowned photographer Ansel Adams, who returned to the site again and again as a source of inspiration. Over the years, Timber Cove became known as “a place to be,” offering a unique location to relax, reconnect, and recharge.

In 2016, Timber Cove's new owners invested in, renovated and repositioned the hotel. This was a careful process, with an overriding emphasis on retaining Timber Cove’s iconic architectural bones and artistic soul while bestowing the comforts and amenities of a modern resort. The design team meticulously blended the surrounding landscape and local artwork through the interior, using an earthy color palette that made heavy use of redwood and stone from the original design. Updated furnishings feature both modern and retro pieces, along with a hint of tribal textiles, white fabrics, worn leather, and preppy plaids to complement the intimate spaces. Variously described as “rustic modern” and “Hippie chic,” the final result is a stunning realization of casual sophistication. More than ever, Timber Cove is a hotel like no other.

Forrest View Room. Redwoods, Pines and Eucalyptus are your neighbors, located within the main building surrounding the Great Room, offering a handcrafted bed and redwood deck.

The Timber Cove outdoor living room is a social and comfortable space for guests to gather and relax.

The Hirsch Room with a view of the Beniamino Bufano obelisk.

The Ocean View Room offers a breathtaking perch above the Pacific Ocean.