"The client’s goals were to create an open and light-filled home that maximized views of the Coachella Valley below and the Santa Rosa mountains to the south and west," says designer Stuart Silk Architects. Thunderbird Heights Residence enjoys a fluid connection between the primary indoor rooms and the outdoor terraces both for entertaining and casual outdoor living. 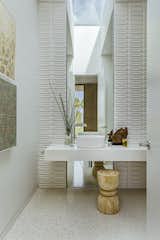 Originally built in the 1960s, the challenge for this project was how to update a mid-century modern house without sacrificing its charm. Situated on a 1.3-acre site perched on a plateau above Coachella Valley, the rugged, inhospitable Santa Rosa Mountains rise immediately from the back yard; bighorn sheep can often be seen wandering on the rocks above. The 6,357-square-foot house sits roughly in the middle of the property; entry is off the driveway and through a private courtyard.

The client's goals were to create an open and light filled home that maximized views of the Coachella Valley below and the Santa Rosa mountains to the south and west. They also wanted to create a fluid connection between the primary indoor rooms and the outdoor terraces both for entertaining and for casual outdoor living with their young children.

The horizontality of this one-story, flat roof home provided an elegant and understated response to the site and a counterpoint to the drama of its mountainous context. By further integrating the house with its desert context, this home has captured a sense of place by making the best possible use of light and landscape. Its rich palette of materials and textures banishes any feeling of austerity, and awakens the senses to provide a wonderful living experience.

The original design was closed-in and compartmentalized, and though the house was remodeled in the 1980s, it suffered from deferred maintenance. This new remodel eventually encompassed 90% of the existing house, including reconfiguring the entire floor plan and the exterior elevations. Portions of the existing foundation and roof structure were repurposed. New brick walls, delicate cruciform-shaped columns, and steel trellises were introduced, as well as large roof overhangs to limit exposure to the harsh sun. Now, walls of floor-to-ceiling glass open the house to views of the mountains and surrounding landscaping and blur the line between the interior and exterior—the experience is one of living in nature. Among the most significant changes was opening the living room and kitchen to two, open-air terraces, and adding a generous pantry and combined mud/laundry room. Several bedrooms were also added to accommodate the growing family (for a total of five bedrooms). The master bedroom was re-envisioned to open out to a private garden featuring a statue of St. Francis. The master bathroom has its own private outdoor shower that is accessible from the main shower. The swimming pool, previously located in the courtyard, has been relocated and paired with a spa in the spacious rear yard at the base of the rising mountains.

Inside, the design departs from the typical monochromatic color schemes of many mid-century homes by introducing unique design elements, rich textures, and bold colors. These elements include the custom designed decorative metal screens at the front gate and entry hall, the custom-designed cruciform-shaped columns, the white terrazzo floor, a bright yellow wall of tile in the kitchen, and the custom-designed aqua blue front door. The bedroom wing is accessed via a corridor lined with white brick, which functions as a gallery for the client’s art collection. The opposite glass wall allows the art to be seen prominently from the adjoining courtyard. Other surprising ideas are evident in the treatment of the kitchen backsplash and bathroom showers. Furnishings reinforce this feeling of delight and complement the architecture. The floor is white terrazzo with amber accents to pick up the warmth of the earth tones found in the landscape.