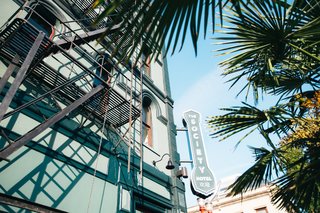 The Society Hotel in downtown Portland brings new life to an old sailor's hotel and provides adventurous travelers with a uniquely local experience.

Part hotel, part hostel, The Society Hotel combines affordable lodging with direct accessibility to the heart and soul of the city. Conceptualized by four partners—building contractor Matt Siegel, friends Jessie Burke and Jonathan Cohen, and colleague Gabe Genauer—the goal was to build a visible and positive influence in a dilapidated area of downtown Portland. The hotel is now a new lodging typology that has launched renovated growth in the area.

A variety of spaces provide a balanced blend of retreat and community. In addition to a 24-bed bunk room and 38 private rooms and suites, guests can mingle in a lobby space with a lounge/cafe, and a rooftop deck with panoramic views of the city.

Built in 1881 and dubbed The Mariners Building, the structure originally housed sailors before becoming a hospital, and later a Chinese dance hall before becoming vacant in 1975. Local architecture firm Integrate Architecture led the restoration of the building, focusing on maintaining the cast-iron storefront, brick and stucco walls, and completely overhauling the interior. (The upper floors, untouched since 1945, revealed furniture, clothes, WWI-era newspapers, and other artifacts in just the state they had been left.)

Megan Blossom and Reiko Igarashi completed the modern interior decor and styling, finding inspiration from the building's rich history. The designers retained much of the original character: the carved wooden handrail remains on the stair, wood trim and wainscot accent the walls, and original doors are re-purposed as custom millwork.

Window graphics provide unobtrusive and elegant signage on the exterior glazing of the historic facade.

The corner of the hotel is decorated with a vintage sign.

The lobby of the hotel contains a cafe and lounge space complete with a fireplace.

A node to the past, original doors have been re-purposed and now provide decorative paneling behind the reception desk.

A hostel like bunk rooms occupies the lower level of the Hotel. Guests are provided with personal lockers and have access to a shared kitchen.

The wood framed bunk beds come complete with a reading light and a privacy curtain.

A variety of guest bedrooms fill the top three floors, in a configuration that closely matches the original plan of the hotel.

The rooftop terrace provides panoramic views to the surrounding neighborhood and city beyond.

The rooftop provides the perfect location to soak in the sights of the city and the culture that awaits.