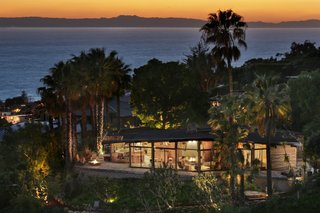 Midcentury architect J. Herbert Brownell built a number of organic modern homes in Southern California that are coveted by modernist enthusiasts to this day—and you can now own one of his ranch-style homes for $4,298,000.

Upon first glance, 611 Allview Place is completely intertwined with the natural landscape of Laguna Coast Wilderness Park in Southern California. Built in 1974, the residence unfolds inside a hexagonal structure that's clad inside and out with a combination of unfinished woods including redwood, cedar, and Douglas fir. Inside, the design leans toward organic architecture, featuring pebble-seeded concrete floors, a sculptural fireplace made with imperial plaster and concrete block, built-in furniture, and Franciscan tile. The overall effect results in a sort of hyper-real immersion between inside and outside, where the nature-inspired elements paired with picturesque views induce an experience where the line between indoors and outdoors is blurred.

Beyond the design details, it’s the story that really makes the Smoke-Lyster Residence a pivotal part of California’s architectural history. We spoke with the second owner, Brock Lyster, who took great pride in restoring and updating the home while living in the house with his family of four.

Ever since Lyster's childhood, he was surrounded by pivotal members of California's midcentury architecture scene, thanks to his father’s successful roof truss company. The family and their close friend J. Lamont Langworthy, who also happened to be a midcentury architect who was pioneering prefab structures at the time, designed their new family home. As the story goes, acclaimed photographer Julius Shulman was persuaded by Lyster’s father to photograph their family home, The Diamond Street House. After which, they were both invited into Shulman’s home to see all the houses he ever photographed in Laguna.

Fast forward 30 years of working in construction and architecture, and Lyster found the Smoke Residence for sale in 2001. Thanks to his breadth of knowledge and experience, he was already aware of Brownell and was actively in search of a home that would accommodate his personal history with modern architecture.

"We kept bumping into his work. We tried to buy a home he designed in our neighborhood, but we weren’t quick enough. Then, there was another house we bought as an investment. Then finally, the third time we ran into his work, it was by far the most special project that I had seen—out of everything that he worked on from the late '50s, '60s, and '70s."

Lyster explained that the original owner, a PHD mathematician and professor relocating from Berkeley, commissioned J. Herbert Brownell to design a new home for his family in the woodlands of Laguna Beach. Having been aware of the architect and his sensibility, William Henry Smoke sought to create a mathematically-inclined scheme within a non-rectangular dwelling. The atypical arrangement of living spaces—comprising two bedrooms, two baths, and a spacious office—allowed each room to have its own special ocean view.

For 10 years, the Lyster family enjoyed the property in its original condition before they started restoring it, and eventually building another house just above it. While making restorations and building the new addition, he used as many of the original materials as possible—mostly unfinished local woods—to highlight Brownell’s distinctive organic modern vocabulary. In the end, Brock points out that he found himself personally identifying with his style, developing a growing appreciation for their shared fondness of honest materials.

"The unique thing about his architecture, is his inclination to use natural materials, particularly unstained woods. He would use something like 20 different colors of wood, which somehow were visually unified by their gritty, untreated condition."

In this photo of the Diamond Street House taken by Julius Shulman, Lyster Brock (left) stands next to his brother on his father's roof truss.