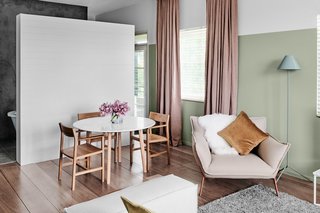 In Melbourne’s once-derelict, now hip St Kilda is a unique little hotel called, simply, The Prince. Not the Prince Hotel, or Le Petit Prince, or Macchiavelli's Prince, and since its recent renovation, no longer the Prince of Wales. After all, is there anyone less cool than the Prince of Wales, his heart-throb offspring notwithstanding?

No, this is just The Prince, forty beautiful, minimal rooms, bathed in natural light, furnished in crisp dark wood and painted a shade of white that just seems cleaner than the average white. The Prince is cool in an effortless way, less intimidating, more welcoming than many hip hotels — after all, shouldn't welcoming be the mission of the hospitality industry?

Do not misunderstand; this hotel did not happen by accident — there are plenty of clever design flourishes, and the by now obligatory Starck bathrooms. But under the guiding hand of architect Alan Powell (a St Kilda local) The Prince has been effortlessly integrated into this ascendant neighborhood.

The restaurants, Cantina St Kilda and POW Kitchen — indulgent Tex-Mex at the former and brew-driven South Asian at the latter — provide more (and better) dining options than one has any right to expect from such a small hotel. Did we mention the Wine Store? Or the Spa? And, incredibly (as if to prove just how much is going on here), the Prince Band Room plays host to international rock acts and DJs, and is, say it along with me now, the hip concert venue in Melbourne.

Like the city itself, this hotel is a most pleasant surprise. “Hip” is something of a vexed word here at Tablet, because it too often connotes an emphasis on flash over good old-fashioned hospitality. But don’t hate The Prince because it’s beautiful. A lesser hotel might settle for being cool, but The Prince backs up its surface with some real substance.