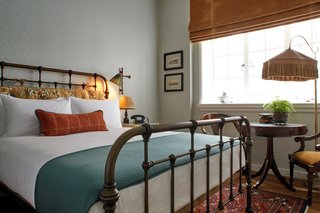 When Nick Jones, the founder of Soho House & Co, first saw the City's disused Midland Bank building in 2012, he fell in love. 'The property had been empty for nearly eight years but there was something about it – the details and scale of it – that just floored me,' Jones explains. The moment he left, he called Ron Burkle, Soho House chairman and investor. 'Ron came to view the building and straight away we began to imagine how the project would take form,' says Jones. Burkle knew a project of this size would require the collaboration of many skills, and so introduced Jones to Andrew Zobler, the CEO of New York's Sydell Group. 'The Ned was a much bigger project than either of us had undertaken before,' says Zobler, 'so it made sense for us to partner on it.'

Soho House & Co has built and run 18 members' clubs – most with bedrooms – and 37 restaurants around the world, while Sydell Group has eight hotels in North America, including The NoMad in Manhattan, Freehand in Miami and The Line in Los Angeles. While both companies have worked with historic buildings before, Jones and Zobler were immediately inspired by Sir Edwin 'Ned' Lutyens' masterpiece at 27 Poultry – all 29,450 square metres of it. 'It was the most beautiful building I'd ever seen,' says Jones. Zobler adds: 'The architecture is outstanding and so well preserved. You can't help but fall in love with it.'

The 250 bedrooms range in size from intimate to large-scale suites – all with a nod to 1920s glamour. Every bedroom at The Ned has been designed to give guests a relaxed yet memorable stay.

Text Courtesy of The Ned