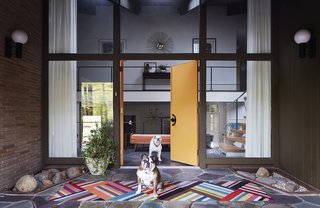 George Marrone was helping a friend look at houses when he stumbled upon a rare find: an obsessively maintained, well-loved midcentury gem that needed some work. Not a heavy lift, not a project that would require an architect or major contractors, just a new vision and some effort.

“Every window had massive coverings and valances. Every surface you can see that was white now was brown,” George recalls, standing in the spacious living room of the Wilmington, Delaware, house he shares with his partner, Michael Nocera. “It was all cosmetic, if you could just see past it.”

George and Michael spent a full year of weekends tearing up carpet, ripping down curtains, painting, and hanging wall-paper—sometimes upside down—while Michael applied his handyman skills to a fairly extensive kitchen renovation and some electrical work. Ultimately, the pair transformed the trilevel house into a stripped-down, brightened version of its former self.

Wilmington artist Carolyn Blish had built the house with her husband, a DuPont executive, in 1959. She sold it in the 1970s to the couple who sold it to George and Michael in 2010. George says city records don’t list an architect, but it’s clear it was more than an ordinary slap-and-dash suburban house of its time, with careful details including built-in external planters around the master bedroom, a three-sided fireplace, a curved, floating staircase, a suspended walnut buffet in the dining room, and entertaining areas that intentionally flow from one to the next.

“I grew up in the ’70s and was drawn to The Brady Bunch,” George says, recalling the sitcom’s midcentury aesthetic, with lots of built-ins and lofty spaces. “This is like my grown-up Brady Bunch house.”

At 4,300 square feet, the residence is also a gallery for his personal, quirky collection of midcentury furniture, which he’s gathered over 20 years, picking through estate sales and learning to navigate online auctions. George uses the word “luck” often when he describes how he’s amassed his enviable lineup, but admits that a little bit of endurance helps. “I love the hunt,” he says.

He started collecting in the 1990s, just after getting out of college. His first pieces were two Paul McCobb Planner Group stools that he found at a flea market for $50. “I didn’t even know who Paul McCobb was,” he says. But after years of plying auctions and estate sales, he now owns a list of classics, some bought at prices that would make any design lover insanely jealous: an original Warren Platner armchair, spotted at an estate sale, for $500; a Finn Juhl Japan chair, purchased at auction for $1,250; a rosewood Mies van der Rohe Barcelona daybed, also bought at auction and usually occupied by bulldogs Sasha and Sophie, for $2,000.

George, a healthcare professional, and Michael, who works in finance, met in Rehoboth Beach and eventually settled in Wilmington, George’s hometown, just a couple of hours north of Michael’s native Washington, D.C. They first lived in a traditional town house, with most of George’s midcentury finds stuffed in the attic or on a kind of museum-like rotation in the living spaces. “In the old house, if I wanted to put something out, I had to put something else away,” George remembers. “It was a running joke.”

But the sprawl of their new house offers plenty of room for his design treasures and for the couple’s art collection, which includes a Damien Hirst “Valium” print and lithographs by Karel Appel and Andy Warhol. In some rooms, the art dictated the color palette, pushing George to venture back out to estate sales or onto auction sites to find just the right thing. “When you’re in a new space, and you have that desire, you have to work at it,” he says.

Collecting midcentury classics was easier in the 1990s, before eBay and online auctions became mobbed by modern design–obsessed newcomers, George laments. “Things have exploded and so have the prices,” he says. But he continues, successfully, to pore over the web for little stashes. A few years ago he found a Louis Poulsen PH 5 pendant lamp from an online dealer selling the fixtures from the University of Copenhagen.

But for all his attention to midcentury design, George isn’t a purist or afraid to combine classics with newer pieces in production today, from Jonathan Adler, Room & Board, or Mitchell Gold + Bob Williams. “There are great things coming out,” he observes. “I like mixing it up with a nod to the past.”

When George is prompted to consider whether he’ll get bored with the “new” house now that the pair is settled in, he leaves that door just slightly ajar. “This felt like kismet. It felt right,” he says. “Maybe there’s another midcentury house out there for me. But who knows?”

By scouring shops, sales, and auctions, George Marrone amassed a giant trove of postwar furniture. He and his partner, Michael Nocera, applied that same work ethic to a 1959 home in Wilmington, Delaware, which they patched up over two years. The couple’s bulldogs stand guard at the flagstone entrance. The door, still with its Space Age knobs, is painted Flaming Torch by Behr. The brass wallhanging above the landing is by C. Jeré.

The residents added double-glaze windows, low-VOC paints, and Energy Star appliances, calling on help just once, to install the Cambria quartz countertop in the kitchen.

Mostly they restored original elements, like the buffet and the staircase. Cherner chairs sit at the head of a Design Within Reach table. The armless Series 7 chairs are by Arne Jacobsen; the third pair are Juliana chairs by Aristeu Pires.

The house is like an anthology of modern design, spread out across 4,300 square feet. In the formal living room alone, there’s a Japan chair by Finn Juhl, a Hang-It-All rack by Charles and Ray Eames, a Scissor chair by Pierre Jeanneret, a Wiggle stool by Frank Gehry, and an Akari lamp by Isamu Noguchi. George began his collection in the 1990s with a pair of Paul McCobb stools, which sit near the fireplace.

Illuminated by track lighting, a teak wall unit by Poul Cadovius showcases pottery by Eva Zeisel and Paul McCobb, among others. The desk seat is a T chair by William Katavolos, Ross Littell, and Douglas Kelley; the Womb chair is by Eero Saarinen for Knoll.

Midcentury completists score the ultimate catch: a 1959 post-and-beam fixer-upper in which to showcase their sprawling collection.

A Petal end table by Richard Schultz is paired with a Platner armchair. These classics mingle with newer items, such as a Desmond room divider by Jonathan Adler and a sofa by Mitchell Gold + Bob Williams.

A sunburst mirror, which George bought on eBay, pops against patterned Antonina Vella wallpaper in the guest bedroom. The lamp is vintage.