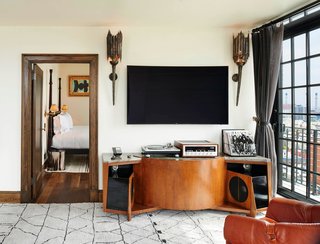 A hotel doesn’t need much more than great rooms, inspiring public spaces, and thoughtful, efficient service. Of course it’s not as easy as it sounds. But when you’ve got the kind of pedigree the Ludlow Hotel has — it’s related to the Bowery, the Marlton and the Maritime, among other Tablet favorites — you’re beginning with a bit of a head start.

The Ludlow’s lineage is especially apparent in the ways in which it resembles the Bowery: the rooms are open and bright, with sun streaming through large casement windows, and the impeccable vintage styling feels historically rooted yet freshly finished. As a social center the Ludlow is just getting started — Dirty French, a fairly self-explanatory restaurant from the Major Food Group, another well-regarded local outfit, opened in September, and the lobby lounge, with its promised trellis garden, is sure to make a few nightlife lists.

And the service is an illustration of why we find ourselves loving the mini-chains — a hotel group with a manageable number of properties has some experience at providing a quality product, but with a long way to go before it becomes an ultra-standardized mega-corporation. The result is a hotel with personality in all the right places: the style can be quirky, but it’s best if the service isn’t; it’s great when the nightlife is a bit unusual, but in the room you want everything in the right place.

So we’ve got high hopes, and no reason to think we’ll be disappointed here. The Lower East Side, though no longer quite the wildest place in New York, is a long way from being tamed, and has long been a bit under-serviced in the hospitality department. Here’s to the Ludlow changing all that.