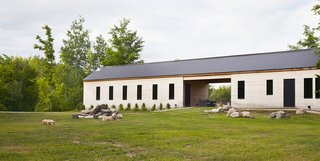 Architects are used to shaping their clients’ lives with their vision. But what happens when a client is a design professional with strong ideas of his own? “A lot of discussion,” says OMAS:WORKS architect Brian O’Brian, who is licensed in the U.S. and works in Toronto. He created a cottage for landscape designer Joel Loblaw in Ontario, and the process was “a constant dialogue,” O’Brian says, “where nothing was set and everything was in play.”

Their exchanges led to a seamless integration of the site and the house, which takes the form of a dogtrot, a style of building native to the American South. Its signature is two narrow wings—kitchen and sleeping quarters—separated by a covered breezeway. Here in the bayside Ontario town of Meaford, the typology takes on a new purpose: “It’s not about escaping from a hot kitchen,” explains O’Brian. “It’s about being in the environment itself.”

Working together, Joel and O’Brian placed the long, L-shaped house between a clearing and a wetland, orienting the structure to best enjoy views in two directions. “The integration of landscape and architecture is absolutely critical,” says Joel. O’Brian adds, “You always know exactly where you are in relationship to both.”

The site, a 10-acre lot comprising a creek, low hills, and rugged woodland, is a refuge for Joel and his wife, Michelle. They had been visiting for more than a decade, first to camp and then to stay in a tiny “bunkie”—a Canadian term for a basic sleeping structure—they built themselves. “Coming up here was one of our first dates,” recalls Joel, who has his landscape design-build firm in Toronto. “I remember Michelle sitting on a Tupper-ware box, in the middle of winter, in front of a fire. It’s a wonder she’s still with me!”

The couple wanted a house that could take a bit of rough-and-tumble from their sons, Cooper, 11, and Emerson, 8, and their two golden retrievers, Ruby and Otis. They got it: The 1,350-square-foot building is lined inside, on the walls and ceiling, with birch plywood. The timber-lined rooms are mostly open to the top of the gabled roof, and they feel both roomy and architecturally complex—yet any nicks or scratches aren’t noticeable. “A cottage should be a place where you can put a hatchet in the wall and it’s fine,” says Joel, laughing. “You can do that here.”

On one side of the breezeway are three bedrooms and a bath; the other side houses an open living room, the kitchen, and a sitting room. As Michelle makes tea on the plywood kitchen counter, under a string of Tom Dixon Beat lights, the boys lounge close by next to a wood stove, in midcentury chairs. Behind them, black-framed windows occupy the corner, offering a vista that changes by the season.

Outside, an orchard that was planted by Joel is part of a gentle remaking of the entire site. Joel deepened a pond and stocked it with trout, established a trail through the woods for cross-country skiing and hiking, and built an outdoor kitchen with a Cor-Ten steel pizza oven, inspired by the Argentine chef Francis Mallmann. “For us, the whole place is a series of outdoor rooms,” he says.

Though constructed on a modest budget, the cottage nonetheless has a quiet elegance. The outer walls are knotty cedar siding, and the Vicwest roof is largely corrugated metal, but each surface is thoughtfully proportioned, and the joints are carefully detailed. “We worked really hard to make the outside language as precise as we could,” O’Brian explains.

Those “thoughtful, simple, clean lines” elevate the design of the house, Joel says, and the family can appreciate that detail work as they sit outside on the porch, where the land ramps up on both sides, melding building and landscape. “At work, I spend a lot of time thinking about nature,” Joel says. But being on the land reminds him that sometimes it’s best to stay silent. “The beauty is there in the environment. How can you improve on that?”

In rural Canada, an architect imports an American typology to create a year-round refuge rooted in the landscape.

Architect Brian O’Brian and contractor Tom Clancy adapted a central breezeway, a distinguishing feature of dogtrot houses in the southeastern United States, for Joel and Michelle Loblaw’s cottage near the Georgian Bay in Meaford, Ontario.

In the kitchen both the walls and the countertop are made of birch plywood. A quartet of black Tom Dixon Beat lights hangs overhead.

The 10-acre property offers ample terrain for the family and pets to explore. Otis examines the pond, which was deepened to 20 feet and stocked with trout.

The flooring is distressed oak.

Joel Loblaw, a landscape designer, created "a series of outdoor rooms," including an alfresco kitchen that is sheltered beneath a cedar trellis. The Butterfly chairs are from Fresh Home and Garden in Toronto.

Emerson, 8, reads in a sitting room where overnight guests stay.

In the bathroom, the sink is by Kohler and the tub is by Maax.