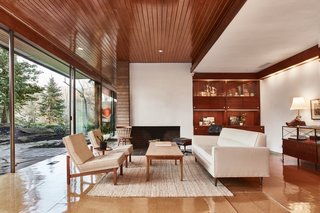 The iconic architect’s midcentury modern home in Philadelphia’s East Falls neighborhood faced demolition before being rescued and thoughtfully rehabbed—and is now once again up for grabs.

One of the few homes on the East Coast designed by Richard Neutra, the Hassrick Residence was originally built in 1958, enjoying a raucous heyday in the ‘60s and ‘70s before eventually suffering neglect and deterioration. It wasn’t until 2008 that the current owners, John Houser and George Acosta, purchased the 5-bedroom, 3-bath property and began the daunting process of restoring the midcentury masterpiece. In an essay published on Atomic Ranch, Houser relates, "Vacant for a number of years, it had fallen into heavy disrepair, like something out of Grey Gardens. Doors were unlocked and windows open. All sorts of animals were living inside."

While researching the home, Houser and Acosta learned that it had been designed for Kenneth and Barbara Hassrick, a wealthy newlywed couple, and their pet kinkajou (a member of the raccoon family that is native to Central and South America). The new homeowners dove into archives at the University of Pennsylvania and UCLA, unearthing original blueprints; photographs; and hundreds of letters between Neutra, the Hassricks, and project manager Thaddeus Longstreth. In an early letter to Neutra, the Hassricks requested that the house "work efficiently, pleasure the eye, comfort the soul and warm the heart."

The iconic dwelling, built in the International Style, presents a modest facade, while the interior embraces the outdoors through a 40-foot sliding glass wall. Other Neutra signatures include the tongue-and-groove ceilings, open kitchen, and commanding fireplace—though the use of salmon-colored Bethayers concrete block is unique, and at the clients’ request. The Hassricks hired master woodworker George Nakashima to build a floating credenza and sliding panels between the kitchen and living room; Houser considers it a marvel that his work was never stolen while the residence sat empty.

A true rarity and a thoughtful restoration of a modernist gem, the Hassrick Residence is offered at $2,195,00. For more information, contact Craig Wakefield.