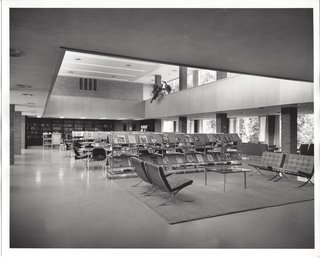 One could say Alden B. Dow was destined to design the wonderful library building we have today. After all, Miss Mary Dow, his aunt, was Midland’s first librarian. His mother, Grace A. Dow, was an ardent supporter of the library from its earliest days, and endowed the Library that proudly bears her name.

The very first Midland Library opened on March 20, 1900, in the Unitarian Church at the corner of Ellsworth and Ashman Streets, with a collection of 100 books overseen by Miss Mary Dow. For the next 15 years it operated as a subscription library until the Library Board voted to make it a free public library and transferred its control to the City of Midland.

Steady growth in the size of its collection and its popularity with the citizens of Midland made a new library building a priority for Mary Dow. Upon her suggestion, her brother Herbert H. Dow contacted Andrew Carnegie, who was funding the building of public libraries across the country. A $12,500 grant was awarded and in January 1919 Midland’s own Carnegie Library opened on Townsend Street.
Over the next 30 years, the Library flourished, outgrowing its little red brick Carnegie building. By this time, Alden B. Dow had achieved national recognition as an architect. In 1949-50 he was deep into the design of one of his largest commissions, the Phoenix Civic Center, which included the Phoenix Public Library as the first of three buildings comprising the complex.

Perhaps because of his involvement in that project, he felt an obligation to fulfill the need for such an important cultural and educational centerpiece in his own hometown. As President of the Herbert H. and Grace A. Dow Foundation, he wrote a letter to Midland’s City Manager in 1950 expressing the Foundation’s wish to finance the design and construction of a new public library to be situated in what then was the family’s apple orchard at the corner of Eastman Road and St. Andrews Drive.
The architect completed the first presentation drawings of the proposed Midland Public Library in August of 1952, with the groundbreaking ceremony taking place the following summer. In the Archives of the Alden B. Dow Home & Studio is a handwritten log book detailing weather conditions and construction progress day by day. There is also brief 16 mm movie footage showing the assembly of the steel framing of the structure. In it a workman on the ground is seen grabbing glowing hot rivets with long tongs and tossing them up to workers balanced precariously on the upper beams.

Grace Dow lived to see her son’s plans for the new library but passed away in 1953. She had been closely identified with the library from its earliest days, and had served as chairman of the Library Board for many years. It was most fitting, then, that on January 12, 1954, the Midland City Council adopted a resolution naming the new library the Grace A. Dow Memorial Library.
The doors of the new Grace A. Dow Memorial Library opened to the public in January of 1955. Visitors saw a $1.2 million building constructed of Tennessee Colonial brick, steel and glass on a 7-acre tract in a corner of the Dow Orchards. As Dorothy Langdon Yates described it in her history of the library, Tell Me a Story – For One Hundred Years, “The Grace A. Dow Memorial Library sat like a splendid vision in a forest of apple trees.”

Its most striking exterior feature was the sparkling oxyment frieze – large aluminum-trimmed green panels made of crushed glass cast in magnesite concrete. The frieze wrapped around the building at the covered walk level and other sections. Keith Doms, director of the Library at the time of its opening, noted that Midland youngsters used to describe the frieze as being made from broken up “coke” bottles.

Inside, red brick, glass, magnolia white plastered walls, and yellow rubber tile floors displayed architect Alden B. Dow’s color scheme. The wood trim was comb-grained oak. Florence Knoll served as interior designer, with furniture and draperies supplied by Knoll Associates of New York.
Just beyond the main desk, a fireplace and two-toned beige rug provided a comfortable seating area with Mies van der Rohe-designed Barcelona chairs nearby. Beyond that was the spectacular Young People’s Reading Room with a 19-foot ceiling and a dramatic sweep of windows 20 feet by 45 feet that brought the outside in. The Children’s Room was furnished with handsome metal chairs designed and scaled for children by Harry Bertoia.

Plans for the Library reflected the Cold War fears of the time. The Library’s builders constructed a Civil Defense Room or bomb shelter in the basement – a reinforced concrete cubicle in which food was stored. In the 1970’s library staff removed the food, mostly spoiled, but the huge bags of candies that remained were still good. It has been said that the staff ate lemon drops and cherry candies for months.

Of the library, Mr. Dow said, “The aim of this library is to open up new horizons, not just in fields of literature, but in history, art, music, drama, and education via films, theater, presentations, and visiting speakers. The aim is to make available all the facets of culture that are around us, not only for the knowledge itself, but also its worth in a new outlook.”

In 1956, Mr. Dow’s “A Chronicle for Christmas,” was produced in the Library auditorium. Introducing his experimental new art form called “Somnofonics – Dream Sound,” the show combined sound, colored-light projected shadows, narration, and music, with the cast entirely behind a screen.
Expansion and remodeling programs in 1985 and 1994 added the north and south additions and brought the total size of the Library to 105,000 square feet, with nearly four miles of shelving. Both projects received generous funding from the Herbert H. and Grace A. Dow Foundation and the City of Midland.

In the spring of 2014, the Library completed a $3 million renovation project made possible through a grant from the Herbert H. and Grace A. Dow Foundation in celebration of the Foundation’s 75th anniversary. The new design was inspired by Alden B. Dow, and included new carpeting in bright primary colors and geometric patterns, new lighting, refinished woodwork, new seating, and other user-friendly improvements.

This fall the Library is celebrating the completion of a major project that added green-blue channeled glass panels to the exterior fascia to recreate the sparkle of the original green oxyment frieze. Continuing their legacy of investing in the cultural and educational cornerstones of our community, grants from The Alden and Vada Dow Family Foundations and the Herbert H. and Grace A. Dow Foundation funded the project.

uploaded The Grace A. Dow Memorial Library by Alden B. Dow through Add A Home.
Add your own project for the chance to be featured in Editor’s Picks.