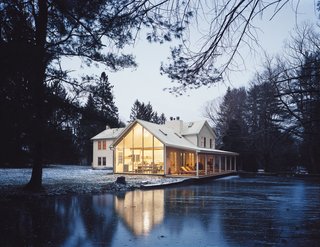 A self-taught designer embarks upon a solo mission to resuscitate a 19th-century homestead.
In 2002, when Tom Givone bought a toppling 200-year-old farmhouse peeling with outdated neon blue paint, his new neighbors in upstate New York advised chucking it straight into a pit in the house’s equally rundown backyard. Instead, the experience helped define the homeowner-turned-contractor's love of the picturesque and channel it into a newfound talent for renovation.

A former advertising copywriter, Givone cheekily gives credit for his roundabout career to the "quintessentially awful" landlord who ejected him from a rent-stabilized studio in the late '90s, which spurred his first home purchase. His self-described "strange and delightful" path to architectural design thus began on a narrow cobblestone lane in the upper reaches of Manhattan in a dilapidated row house, built in 1882 among a double row of identical clapboard abodes. From there, Givone edged ever northward, to the western edge of the Catskill Mountains, where he first spotted the locally infamous blue farmhouse, then three others that he also eventually rehabbed back to health. His current weekend abode, nicknamed the Floating Farmhouse, is—so far—his capstone project, a synthesis of personal taste, material experimentation, and historically sensitive restoration: a living laboratory for how to bring the vernacular past into the present.

This labor in homemaking has been methodical, if not by choice then by financial necessity, owing to the economic depression of 2008. Instead of suspending all activity on the creek-adjacent farmhouse, Givone focused on perfecting his materials. For the lattice of oxidized tube steel that frames the back wall of the rear addition, three years of exposure to weather (aided by a daily acid bath) yielded a just-so leather-like patina, repeated in the central fireplace stack, which is finished in matching weathered Cor-Ten steel.

Givone considers his pizza-cooking technique in front of the custom built wood-fired oven.

"The hope has been to combine archaic and modern elements in a way that would enhance the beauty of each by virtue of its contrast with the other." — Tom Givone

The Floating Farmhouse’s semitransparent addition has a roofline that matches the pitch of the original 1820s farmhouse. A porch, tucked under the side eaves, is cantilevered over a stream that runs through the property. Ikea loungers are illuminated from the interior by commercial gymnasium lights repurposed as pendant lamps.

The table is situated in front of the house’s rear wall of skyscraper glass. Laminate kitchen cabinets by Ikea are framed in wraparound bluestone; the 48-inch commercial range is by FiveStar.

The Floating Farmhouse’s semitransparent addition has a roofline that matches the pitch of the original 1820s farmhouse. A porch, tucked under the side eaves, is cantilevered over a stream that runs through the property. Ikea loungers are illuminated from the interior by commercial gymnasium lights repurposed as pendant lamps.

A gas fireplace fronted in weathered steel warms up the lofty master bedroom, whose spare decor is framed with beams discovered in a Pennsylvania barn. The Tizio desk lamp is by Artemide.

In the guest bathroom, Givone installed a hand-chiseled sink made of 17th-century marble quarried from the hills outside of Rome.